278 entrants, 1,670 photos, 28 states and 4 countries come down to these winners and honorable mentions.

For more than a century and a half, the light, cultural diversity, natural beauty, and mild climate have lured amateur and professional photographers to New Mexico. Luminaries such as Eliot Porter, Charles Fletcher Lummis, Edward S. Curtis, and Ansel Adams either lived here or came on photo safaris. Many of today’s most accomplished photographers call New Mexico home.

“The New Mexico Magazine photo contest stands as a shining example of the impact that photography still plays in our lives and state today,” says contest judge and Santa Fe Photographic Workshops director Reid Callanan, who, along with Palace of the Governors photo archivist Daniel Kosharek, our editor in chief, Dave Herndon, and art director Edie Dillman, scrutinized more than 1,600 entries. “New Mexico offers more photographic opportunities and locations than any state I have ever lived in, and the photographers who choose to live here are some of the best anywhere.”

Callanan explains that the winning images all possess similar qualities and characteristics: emotion, great use of light, personality, uniqueness, and surprise. “There is an abundance of black-and-white imagery this year that speaks to the creative vision of the submitting photographers,” he says. “Picturing the world in black and white separates it from reality, and makes it more accessible as an expressive art form. Photographers who see the world creatively record what they think and feel—not simply what something looks like.” 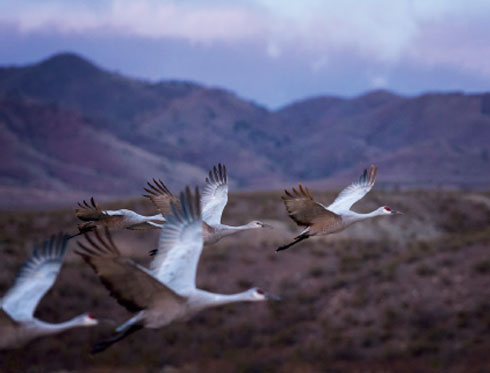 When she’s not training poll workers in California’s San Diego County, Sandy Zelasko can be found traveling with her trusty Canon EOS-1D Mark IV camera. Zelasko’s childhood camera, a Kodak Pocket Instamatic that used 110 film, was always with her as she traveled the western United States with her parents. “My dad would never stop the van so I could get out and take pictures,” she says, “so I would have to peek out of the van’s super scoop [pop-up window] and shoot on the go.” The camera, which had been lost for years, was recently returned to her in the form of a Christmas present from her brother. “It still has film in it,” she says, “but I’ll stick with my trusty digital SLR.”

It was around Christmastime in 2012 that Zelasko spent a week at the 57,331-acre Bosque del Apache National Wildlife Refuge, where the wintering population of sandhill cranes tops 17,000. Zelasko, who says her mission in life as a budding full-time photographer is to educate people on how their environmental footprints affect the natural world, first came to New Mexico with her husband 30 years ago. She believes that the secret to capturing a great image in the digital age is one part patience and one part perseverance. “Anyone can take a picture these days,” she explains, “but to take one that’s lasting in memory, you’re out there when no one else wants to be out there. When my husband is ready for dinner, I’m ready to grab the camera equipment and hit the pavement.” At Bosque del Apache, that often means waking up before dawn and following the sunrise across the opaque, pink-blue horizon. Zelasko returned to the wildlife refuge in November 2013 to capture more stunning images of migratory birds. 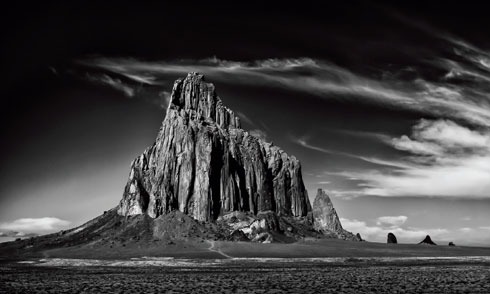 Retired photographer Gordon Middleton spent years creating slide shows and audiovisual presentations for businesses. Now devoted to his digital Canon EOS 5D Mark III, Middleton was extremely fond of his first camera, a Zeiss Ikon 35mm he received while in high school. Middleton was pleasantly startled by the Spanish Colonial and Pueblo architecture of Santa Fe during his first visit to New Mexico in 1985. Architecture remains his favorite photographic subject, especially in black and white.

“The Ship Rock photo was taken in 2013,” Middleton says of the northwesten New Mexico landmark, “and it was really just a process of roaming around it until the light felt right. I love the Taos Pueblo photo with the white door, too. It has this almost urban quality, mixed with a bit of local tradition. It’s an image that makes people want to look for more than two seconds. That’s a big part of creating a lasting photo.”