On With the Show

View the print version NEED TO KNOW
The Shuler Theater presents
The Centennial Rose, a variety show celebrating the theater’s first 100 years, on April 25 at 7 p.m., April 26 at 2 p.m., and April 27 at 7 p.m. A champagne reception follows the April 27 show. The Shuler Theater is located at 131 N. 2nd St. in the heart of the Ratón Downtown Historic District. (575) 445-4746; shulertheater.com

RATÓN’S SHULER THEATER first drew Bill Fegan to its stage in 1963, a couple of years before its 50th anniversary. When the vaudeville-era opera house marks its 100th birthday this month with The Centennial Rose, Fegan will be there in the lobby, seated by the doorways leading into the auditorium, with the same glow of satisfaction that he has before every show—about 60 each year.

Ringing the lobby, so high above everyone’s heads that many in the crowd won’t notice, is a panorama of eight glorious WPA murals painted in the 1930s by Manville Chapman to illustrate the rich history that produced Ratón and its Shuler Theater. From Cheyenne Village 1845 to Wootton Toll Gate 1868, showing Ratón Pass on the Santa Fe Trail, Chapman’s colorful panels portray the people and the growing commerce of a place where many New Mexicans first set foot in the state.

Trappers, traders, and settlers led to the first sprawling ranches, followed by the railroad and nearly a dozen coal camps spread in all directions around the bustling new town called Ratón. In Raton’s First Street 1893, Chapman portrayed a view of town remarkably similar to the one looking west across the railroad tracks to the shops lining First Street, backed by houses climbing the edge of the Rockies toward the landmark Goat Hill, which holds the iconic Ratón sign. The Shuler Theater itself has joined Chapman’s historical panorama to occupy the very heart of the town’s own storied history.

Beneath the second mural is the door to Fegan’s office. He’s there every day, often booking and promoting shows or selling tickets, and he’s at his best when giving impromptu tours of the theater to curious sightseers.

“The city of Ratón built the theater and still owns it,” Fegan says. “We’d just achieved statehood in 1912. Most of Ratón’s citizens had come from Europe to work in the mines. They came from music backgrounds where each town had an opera house.”

Ratón’s first doctor was also its mayor, James Jackson Shuler. With the mines and railroad bringing commerce and new residents, Ratón needed an opera house, Shuler said, and the new building would also house a city hall, the police and fire departments, and the jail.

“Many people were opposed to the expense,” Fegan tells visitors. “They didn’t mind $25,000 for the opera house, but they were so mad at the $55,000 price tag for the whole municipal project that the entire city commission fled the state for three days. They stayed across the Ratón Pass in Trinidad, Colorado, while Dr. Shuler won over the opposition.”

Initially called City Auditorium, the downtown venue’s first show was a big musical, The Red Rose, on April 27, 1915. When the mayor died four years later, the name was changed to Shuler Auditorium. Bill Fegan changed it to Shuler Theater. “I never asked anyone. I just started calling it that,” he says. “No one said a word.”

Ratón was a bustling transportation center when Fegan arrived in 1963. “Constant trains, dozens of trains every day, mostly freights taking the coal. And the bus station was just down the street,” he says. “It was a bustling little town because people had good jobs and good pay. There was mining, railroading, and ranching.” 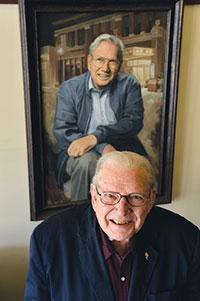 Bill Fegan and his 2007 portrait in the Shuler lobby, painted by Mitzi Congleton.

Fegan had been mounting shows since he was a boy, and started his Kaleidoscope Players in 1960 while working on his master’s degree in theater at the University of Alabama. Ratón’s Federated Women’s Club hired his five-member touring troupe to perform Androcles and the Lion at the Shuler, a fundraiser toward the purchase of a Steinway grand piano for the theater.

“We drove in over the Ratón Pass,” Fegan remembers, “and we were just blown away by the scenery, the vistas of all the mesas.”

Since that day, he’s spent most of his life in Ratón.

After the success of Androcles—Fegan played Caesar—a group of businessmen and city officials asked him to stay and set up shop.

“The Shuler was pretty well run-down,” he recalls. “The city offices were still here. There was no scenery and no lights. Everything had a layer of coal dust.” In 1976, a bicentennial grant restored the theater to its former glory. “They built scaffolding all the way to the clouds on the ceiling. They scrubbed every surface, inch by inch, including the murals in the lobby.”

Fegan had left New Mexico in 1974 to take over a company producing nationally touring stage shows with Lana Turner, Tyrone Power, Bette Davis and other stars. By the 1980s, coal mines— long the economic engine of Ratón—had started to close. Seeking small businesses to restore the town’s vitality, Ratón flew its city manager and a businessman to Dallas to court Fegan to return. “If I brought my business here,” Fegan says, “the Shuler was mine to run.” In 1988, he returned for good, and it’s been very good indeed.

The Shuler presents a wide range of theater, music, and dance, both touring and local—in a town of just 6,500 people. Five family foundations have created endowments to support the arts in Ratón, and they take good care of the Shuler. Another estate was given entirely to the Shuler’s Santa Fe Trail School for the Performing Arts to buy the building next door and create the Isabel Castillo Performing Arts Center, which houses a black-box theater and scene shop and hosts rehearsals, classes, and receptions. Ratón’s Whited Foundation is so generous in underwriting the Shuler’s shows that the top ticket price never exceeds $20, even for touring shows that cost $60 in bigger cities. In 2010, the Whited Foundation received the Governor’s Award for Excellence in the Arts; Fegan received the award in 2007.

Fegan turned 88 on March 9, and in addition to his workload, he swims laps at the aquatic center three mornings each week. “I could never just sit at home,” he says. “I’m here at the theater every day.”

Right now he’s busy producing The Centennial Rose, a variety show reprising highlights from the Shuler’s past that will be performed during the last weekend of April. “I’ve invited some people back for it. I’m going to sing ‘I’ve Grown Accustomed to Her Face’ as Henry Higgins from My Fair Lady.” His accompanist will play the Steinway grand, the piano his Kaleidoscope Players helped earn with their first Shuler show, back when Jack Kennedy was president and Bill Fegan was Caesar.

Tim Keller is a Ratón resident who posts his writing and photography at TimKellerArts.com.