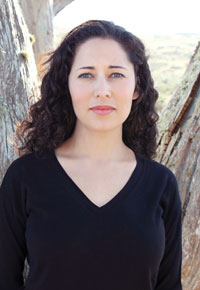 Santa Fe grandmother Jenny Zamora Valdez has a lot to brag about. Not only does she talk with her granddaughter, Kirstin Valdez Quade, every other day, but said granddaughter recently won the National Book Foundation’s “5 Under 35” award. Her collection of stories Night at the Fiestas (Norton) was released in March.

As a child and teen, Quade says she “spent a lot of time with my grandparents, my great-aunt, and my great-grandmother. I was constantly pestering them for stories.”

Quade’s own stories capture northern New Mexico in startling and lucid scenarios, from the ne’er-do-well Amadeo Padilla, chosen to represent Jesus during a no-holds-barred Penitente reenactment (“The Five Wounds”), to a naïve though astute teenage girl who takes the bus from Ratón to Santa Fe to seek adventure with a party-girl cousin during Fiestas. Another story, “Nemecia,” is a Norteño gothic tale of a violent girl fostered by her aunt and alternately feared and worshipped by the cousin she absentmindedly abuses.

Although Quade was born in Albuquerque, she says, “My relationship with New Mexico is one of belonging and not really belonging, because I moved away,” as her father was a traveling geologist. She spent a lot of time in the car reading as her parents drove all over the deserts of New Mexico, Nevada, and Arizona. When they stopped and her dad headed off to the hills with a rock pick, she waited by the car, or in the tent if they’d set up camp, “thinking about stories or telling myself stories” that loomed large in that stark landscape. “When we passed through the Mojave Desert, we always stopped to visit the 150-year-old gravesite of the LeBeau sisters, who died of diphtheria as children. It was so compelling.”

Even now, she says, “One of the things I do when I’m in New Mexico is to drive around with my grandparents and great-aunt to the towns they grew up in, like Torreón and the Santuario in Chimayó. I love being in the car with them, talking. Time passes really easily. Their memories are triggered by passing landscape, and they tell stories in a way that comes organically.”

Quade’s voice transforms what—in less skilled hands—would be slight regional yarns into nationally recognized works. “The Five Wounds” ran in The New Yorker and was included in Best of the West 2010. “Nemecia” was included in The Best American Short Stories 2013 and The O. Henry Prize Stories 2014. Quade’s writing is inking New Mexico’s culture into her readers’ consciousness as indelibly as Carson McCullers’ oeuvre evokes Georgia.

“When I’m in contemporary Santa Fe,” Quade says, “I feel like I’m constantly experiencing stories from the past overlaid on the present. My grandfather is a stone-mason; he’ll say, ‘I built that wall,’ or ‘I had to go up north to get those stones.’”

In March, she added a new, deliciously triumphant layer to her Santa Fe associations (and a new thing for her grandmother to brag about): She gave a reading at Collected Works Bookstore, where she used to work as a bookseller.

The title story of her book, “Night at the Fiestas,” came about because she wanted to write about Santa Fe’s Fiestas as they were when her mother was a child. “I do think these sort of festivals can be transformative times where you can lose yourself. At night, there’s lots of music, dancing, drinking, and a loss of self that happens. For teenagers especially. The experience of being a teenager is so much about imagining different personas and trying on different versions. It’s not always possible.”