Look! Up In The Sky! 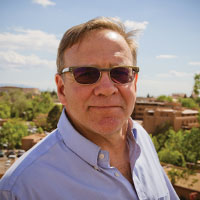 STARGAZING HAS long been a favorite pastime in these parts, going back at least as far as the ancient Puebloans who inhabited Chaco Canyon. A thousand years later, their petroglyphs are still revealing complex astronomical observations. As Karen Coates reports in The Stars of the Show, we continue to enjoy atmospheric conditions—most notably, a blessed lack of air and light pollution—that enable a luxurious view of the night sky. Bet you didn’t know that New Mexico is home to two of the world’s 26 Dark Sky Parks.

Of course, telescopes help, and those parks—Chaco Culture National Historical Park and Clayton Lake State Park—are equipped with observatories and staffed by rangers who provide knowledgeable interpretation. If any of this sounds like cause for celebration, then you’ll be interested to learn about the star parties that are held all around the state on an ongoing basis throughout the year.

If you didn’t know about the ancient Puebloans, you might say that artist Charles Ross is taking stargazing to an unprecedented extreme, but in fact he’s doing a version of what they did. His monumental Star Axis is an edifice designed to help observers contemplate what he calls “the dance of the spinning earth among the stars.” In Stairway to the Heavens, writer John Muller and photographer Jen Judge do an admirable job of translating Ross’ high concept into terms that a layman with a low tolerance for artspeak (like me) can understand and appreciate.

No less a plainspoken fine writer than Tony Hillerman himself found in New Mexico’s geography a mother lode of spiritual inspiration. In Charles Poling’s oral portrait of him, the late novelist’s daughter Anne says, “Dad always was very interested in...how people imagine themselves as part of the bigger picture.” And N. Scott Momaday (Kiowa) shares his perspective: “The Indian has a keen understanding of that spirit of the land...and Tony expressed that essence very well.” Preoccupied as he may have been with Navajo metaphysics, however, Hillerman grounded his curiosity in the terra firma of police procedurals.

The irrepressible, organic spirit of New Mexico finds myriad ways to express itself. A coterie of musicians affiliated with NMSU in Las Cruces have concocted an ambitious recording of new classical music called Haunted America Suite, which derives inspiration from Georgia O’Keeffe’s tonal abstractions, ghostly regional folklore, and the mysterious desert itself. “The Southwest itself is another world,” says composer Justin Raines in Will Clattenburg’s report. “You couldn’t ask for better surroundings to inspire such music.”

All this testifies to what Donna Stewart, the author of the “Only in NM” essay, calls “the powerful rawness of New Mexico.” Her piece brings us back to Chaco and its “wild canopy of stars.”