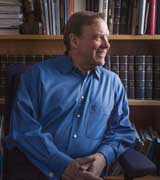 THIS IS NOT THE BEST LETTER you’re going to read in this issue of the magazine. In fact, it will come in a distant fourth to the ones in the Mailbag, a trio of sentimental and heartfelt responses to stories in the February issue. They share a common theme of profound respect for heritage—which is clearly a core New Mexico trait. One is a mini-memoir of a happy boy’s life in Nob Hill in the middle of the last century; another is a testimonial to the generous spirit of Lloyd Kiva New. The letters are nostalgic in that they express fond recollections of times past that seem somehow sweeter, but their points of view are by no means retrograde. And the articles they refer to place their subjects in historical context, then proceed to detail ways in which they can be encountered anew today.

The third and final letter in the Mailbag is an account of emotions provoked by reading David Pike’s piece about the moving of a massive Peter Hurd mural from Houston to Artesia. Later in the issue, we delve deeper into the muralist’s legacy with Candace Walsh’s eloquent account of the careers of artists Hurd and his wife, Henriette Wyeth Hurd, and the gracious life they created on a homestead near Ruidoso. The article features anecdotes related by their son Michael, himself a painter who maintains the property as a guest ranch with a gallery that features multiple generations of Wyeth and Hurd paintings. Finally, Peter Hurd’s own paean to the landscape of his beloved New Mexico, originally published here in 1961, is excerpted. Reminder: New Mexico Magazine has for 93 years been a vessel and vehicle for expressions of love of the state and its heritage.

And so it remains. Find further examples of such continuity in the furniture designs of Emily Henry, who derives inspiration from the legendary Millicent Rogers, and in the story about the 40th anniversary of the Indian Pueblo Cultural Center, which represents the most deep-seated New Mexico legacy of all.