In His Own Skin

Frank Buffalo Hyde battles stereotypes with a more inclusive vision of what painting should be.

“THAT'S MY REAL NAME, by the way,” Frank Buffalo Hyde announces out of the blue. “A lot of people think I made that up.”

He’s sitting with his paints in the back room of Studio Central, a studio/gallery space in the Santa Fe Railyard that he shares with his wife, the ceramist and painter Courtney M. Leonard. The front room is stocked with everyday items transformed into Native art (or vice versa): her mugs painted with abstract splashes of color and images of skateboarders, his T-shirts printed with ironic buffalo and tepees in what he calls “Miami Vice pink.” The door leading back to the studio is open, inviting visitors to wander in on Hyde while he works on a painting of a live buffalo trapped between lettuce and an oleaginous slice of cheese, burgerized. 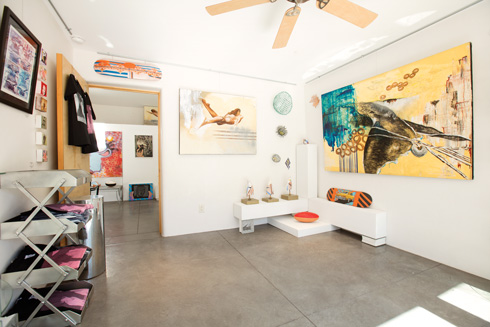 The name Buffalo belonged to his great-grandmother, a member of the Nez Perce tribe, he explains. His last name is inherited from his father, the sculptor Doug Hyde. But even though he comes by it honestly, for years he let only friends and family call him Buffalo. “It’s kind of corny, dude.” He mimics the deep, stilted voice of a TV-western Indian: “‘Frank Buff-a-lo Hyde.’ It’s very stereotypical.”

Subverting stereotypes is Hyde’s stock in trade. Born at the old Santa Fe Indian Hospital in 1974, he’s part of a generation of what he calls “Native art mutts,” kids of mixed tribal origins whose parents met at the Institute of American Indian Arts. Like many of his peers, Hyde grew up sensitive to how Native Americans are represented outside their communities, and came to admire the painters Fritz Scholder and T. C. Cannon, who poked fun at the pop mythos of the Indian. But his path to picking up their torch was a roundabout one.

Hyde spent school years on his mother’s Onondaga reservation, amid the lakes and dairy farms of central New York, where art was treated as a pleasant hobby. It was only when he returned to Santa Fe each summer to hang around his dad’s studio that he felt the gravity of the Southwestern art scene. Doug Hyde, whose work is in the Smith-sonian and whose sculpture Buffalo Dancer graces the grounds of the Roundhouse,kept a reference library to research cultural details and a stack of magazines chronicling the state of Indian art, which his son devoured. Though the younger Hyde was born missing an arm and a leg, he helped out with sculpture work until a few close calls with a saw scared him off. “I was like, ‘I’m going to be a painter, Dad,’” he jokes. “I’m already missing enough parts.”

Back in New York, he turned down an art scholarship to the Pratt Institute in order to chase stardom in a rock band he’d started with friends from his reservation. When that got old, he enrolled at IAIA—for writing, he thought, until a class with the painter Gregory Amenoff changed his mind. He spent his twenties imitating his idols in a variety of styles. One journalist dubbed a series of his early political paintings, scribbled over with words, “Basquiat on the Rez.” “That was the last interview I did for like 10 years,” Hyde says. “But I could see the correlation for sure.”

He acknowledges his recent candy-colored stencil paintings’ debt to Warhol, Lichtenstein, and other midcentury pop-art giants. It’s a natural reference point for work that critiques the commercialization of culture—in the case of Hyde’s targets, the cheap appropriation of Native symbols and imagery. He’s painted Gwen Stefani wearing feathers and fringed buckskin, from a painfully misguided No Doubt video, along with portraits of Picasso in a headdress. And, yeah, he’s painted a whole herd’s worth of buffalo. As a symbol, the animal roams the fraught space between indigenous culture and United States history where Hyde has made his home.

“My show at the Museum of Contemporary Native Art [in Santa Fe] was called Ladies and Gentlemen, This Is the Buffalo Show. People had been bothering me about  it for years, so the whole show was buffalo-themed,” he says. “I had buffalo soldiers, I had Buffalo Bill from The Silence of the Lambs, I had buffalo wings, the Buffalo Bills.”

The exhibition, held in 2012, brought some of his biggest sales to that point. Along with solo works, Hyde included collaborations with younger artists, an unusual gesture that he says is important to community. Perhaps in part because he’s never shown at Indian Market, where he feels his nontraditional work would be out of place, Hyde places special value on noncompetitive relationships with his peers. “People think artists get together and they’re like, ‘Oh, how’d you get that shade of magenta?’” he says. “We help each other out when we can, but it’s not like that.”

He and Leonard have supported each other’s art ever since their first date, which began on the steps of the National Museum of the American Indian in Manhattan. Now that they share a work space, they try to involve other artists they admire. Studio Central’s coLAB series features canvases shared between Hyde, Leonard, and friends like Jamison Chas Banks and Cannupa Hanska Luger. Rather than look over one another’s shoulders, an artist will start a piece in private and pass it to others to do what they want with it, exquisite-corpse style. Hyde hopes to host other kinds of creative collaboration as well, possibly with the help of MAKE Santa Fe, where Leonard is on the board.

But mostly he paints on his own, in this airy, light-filled back room, occasionally breaking off to explain his work to people who happen across Studio Central while waiting for a movie at the nearby Violet Crown Cinema. “I’ve always had this idea about demystifying the creative process. Honestly, art’s not rocket science,” he says. What Hyde cares about is his concepts, which he’s always happy to talk about: “If I can get someone’s attention about stereotypes and perceptions of contemporary Native art, I’ll have done my job.”

The 95th annual Santa Fe Indian Market takes over the Plaza the weekend of Aug. 20–21 (505-983-5220; swaia.org), but its hundreds of booths are just the beginning for Native art aficionados in the City Different. Here’s a week’s worth of ways to soak up the scene:

The Institute of American Indian Arts has produced generations of Native art luminaries, from T. C. Cannon to Rose Simpson. Call ahead for a guided visit to the sculpture-studded campus, where a new semester starts today. Be sure to visit the Balzer Gallery and ask about the Digital Dome. (505) 424-2300; iaia.edu

Held in conjunction with Indian Market, the six-day Native Cinema Showcase begins today with free screenings at the New Mexico History Museum. Films from the market’s juried competition will be shown Friday, and there’s an outdoor screening in the Railyard on Saturday. (505) 983-5220; swaia.org

The Indigenous Fine Arts Market, now in its third year, kicks off three days of fine art booths and contemporary cultural happenings in the Railyard. (505) 819-3695; indigefam.org

Explore dozens of local galleries with a Native bent, including Blue Rain Gallery, home to many of Indian Market’s biggest names (505-954-9902; blueraingallery.com), and Niman Fine Art, owned by the family of Dan Namingha (505-988-5091; namingha.com).

After doing the rounds at the main event in the Plaza, make time for IM: EDGE, Indian Market’s recent contemporary addition. The show runs Aug. 18–21 at the Santa Fe Convention Center. (505) 983-5220; swaia.org/Exhibitors/Indian_Market_EDGE