The Part of the World I Love Best

Excerpted from "Peter Hurd writes with Feeling on the Subject of his Art: New Mexico" / January 1961

by Peter Hurd photos by As Noted

Above: Bob Nugent / Courtesy the Place of the Governors Photo Archives (NMHM/DCA) #043588

IF YOU TAKE a map of New Mexico, set one point of a pair of dividers somewhere a little north of Silver City, and swing a circle with a two-hundred-mile radius, you will encompass the part of the world I know most intimately and love best. Here is a terrain of wide variety in most terms. Within this circle are found climates that vary from the subtropical to the Arctic-alpine, depending on altitude above sea level. As it is crossed by transcontinental highways and railroads, part of it—a relatively small part of it—is known to tourists. But the greatest part is remote from any road but the most primitive ones and known only to isolated ranchers, a few forest rangers, and prospectors. It is these lonely areas that have a constant, ever-fresh appeal to me. This land and its people have jointly been the subject of the paintings and drawings which have occupied me for the greater part of my life. Here in the ensuing paragraphs, writing as I might make a sketch with a few broad strokes of charcoal, I will try to tell why.

First of all is the light. For in this region the air, usually dry and thin, combines with the sun of our latitude to form an ever-changing succession of atmospheric effects. These effects, the product of lens-clear air and full sun, seem infinite in the variety of their combinations. A distant sierra may become at dawn a chain of amethysts inflamed with inner atmospheric fires. With morning twilight, cool, transparent foreground shadows vanish, and as the sun appears, the effect changes palpably from minute to minute until, with the sun near meridian, this world of desert and mountain has completely altered in character and in mood.

For here everything is drama. After the lyric exuberance of dawn, the drama is now intensified; as the sunlight increases, beats fiercely down from overhead, objects become somber and austere. Shadows huddle beneath them, barely visible. This, it seems to me, is the most difficult time of day to paint. But in this very austerity and bleakness are contained elements of great appeal, if not beauty. Now a windmill or a lonely shack looms in stark impressiveness. In the distance, gray tones of azure, pearl, and silver tremble over the slopes of the sierra. Seen from afar, the desert quivers like a sea and breaks into foam under the blaze of sun. Shifting cloud shadows like ink spots pattern its surface. One is aware poignantly of the face of our planet and of the deepening mystery of our presence on it. Man’s occupancy of this region even now at times seems precarious. Yet human beings roamed over this land many thousands of years ago; so far as it is known, man’s habitancy has been an unbroken one ever since their time. But then, even as now, water was the determining factor. 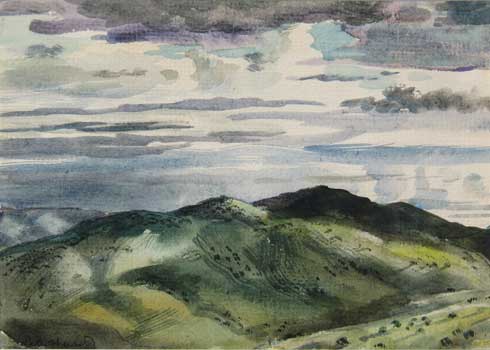 To inhabitants of an arid land, water inevitably has a wondrous and precious quality unknown elsewhere. For a painter there is added to this the visual marvel of water in all of its varied forms. The rainy season comes to us in July and August, and then may be seen almost every day the exciting union of sky and earth. The first rain that descends like vaporous gauze from a cumulus cloud may be followed within an hour by the roaring crest of a chocolate-colored torrent. And in contrast to the terror of floodwater, the intimate murmur of an irrigation acequia is a comforting sound that to me belongs with the beginning of my memory. How can water, a substance so commonplace elsewhere, seem so different here? Perhaps again it is the light of this region that, when reflected from it or mingled with it, completely transmutes it. It may become pure quicksilver lying in pools on the desert floor after a rain, or somber gold that fills a tank at dusk; another time it is a sheet of dull lead beneath an approaching norther. Or it may be mere illusion, as when in full daylight one sees a mirage floating above the baked plains: a lake of flickering tinsel across which the warm air vibrates and in whose mirror surfaces nonexistent castles, trees, Arab caravans are reflected.

Not far from our house is a knoll over-looking a tank for watering stock. To go there on a clear night and gaze down on the stars flaming in the dark water below is to evoke a strange illusion. For after a few moments the earth flattens and becomes a thin disk: The tank is a window opening on the vastness of other galaxies below and beyond. We are involved for a time in a vivid dream of cosmos—a dark speck swinging with the glittering constellations.

If the effects of light and vapor and water seem infinite in their variety of mood, so too does the terrain. At the eastern edge of our imaginary circle is the Pecos Valley.

Here on irrigated farmlands are the landscapes that recall those mythical groves of Poussin’s paintings; and meadows that might have been painted by Constable or Innes. Beyond on all sides are the grazing plains. Westward in the foothills of the Sierra Blanca where we live, the landscape changes abruptly. Now the creosote bush, whose witch hazel fragrance fills the desert air after a rain, yields to piñon trees—to the junipers and Apache plume. Still higher, as the rainfall quota increases, the plant life changes with every thousand feet of climb; beyond the forest in the treeless Alpine region above eleven thousand feet, an entirely different flora and soil exist.

What a fascinating proving ground this land has been for plants! Here nature has evolved hundreds of new genera, adapting them through the ages to conditions which would seem impossible. On our ranch at San Patricio, which has an average rainfall of sixteen inches, we have found tiny ferns growing on a rocky hillside, and in shady canyons there are places where moss grows. In the driest areas, plants have learned to live on three inches of annual rainfall.

Further westward, the terrain changes repeatedly. Extinct volcanoes alternate with the beds of forgotten oceans. In this austere and light-drenched landscape, the history of our planet is manifest; and in eroded mesas and canyons and cliffs of banded sandstone, its very bones appear. At times we seem to be wanderers on the moon, until suddenly the reassuring greenery of the valley appears. Or our road winds through round foothills textured with tawny grasses that make them look like old brocade. We move in and out of watered valleys with groves of cottonwood and live oak which seem to belong to legendary land. There can be no such thing as monotony; all is variety, change, contrast.

I have described my country from the point of view of a painter, stressing its visual uniqueness and its sensuous appeal. It has of necessity been a one-sided account dealing with what has motivated my work through the years. If I have at times seemed agape with wonder at what I describe, it is because this very feeling of wonderment has been the principal force urging me to paint. I have never lacked for subject matter, but rather have at times been confused by its plenitude and richness. Yet I believe that subject matter in itself is of no vital consequence. For the stuff of great art has always been born of inner vision and contemplation. In what form it emerges depends on the environment and individuality of the artist.

In an age of anarchy in painting, I have been neither antagonist nor protagonist of any school. One reason is that I am far too busy (as well as indifferent) to bother with the learned discussions and arguments that fill the art journals. I gave up trying to read these when the feeling kept recurring that I had heard the same puerile nonsense long ago. Only the artist cant has changed a little since my art student days thirty years ago. There is now a flourishing new school of double talk.

I believe that there are as many ways to make a painting as there are gifted painters; that it is just as rare and difficult to produce a first-rate work in the non-objective as in the representational style—perhaps more so, since I have never tried the former one. Reality for a painter, as for a poet, is always a matter of inner vision of his own universe. A painting should be an intimate poem, one that invites repeated contemplation—above all, it should be a prolonged and haunting echo of human existence.