A group of Las Cruces musicians has conjured an eerily beautiful Southwestern soundscape. 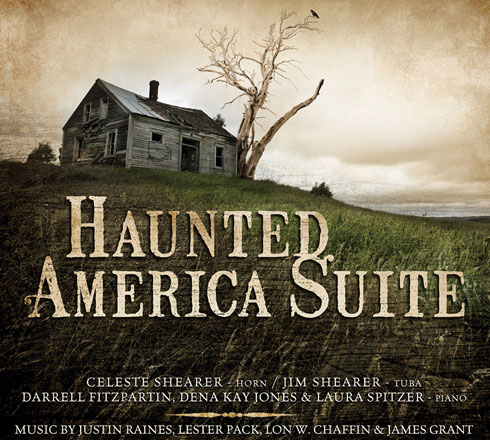 THE AUDIENCE at a preview performance of Haunted America Suite wasn’t expecting actual ghosts. But as an eerie movement came to a close, everyone packed into Atkinson Recital Hall at New Mexico State University witnessed an event that—whatever its origins— definitely wasn’t planned.

“We were right at the end of ‘The Bell Witch’”—the suite’s fourth movement—“when all the lights in the auditorium went out,” recalls Jim Shearer, the New Mexico State University Regents professor of music who was the tuba player that night. “The stage lights, the emergency exit lights, they all blinked off. The audience was freaked out. We were freaked out. Afterwards, people came up to us and said, ‘Hey, that was a nice touch with the lights,’ but we couldn’t take any credit for it.”

Technical glitch or ghostly prank? Now listeners can decide for themselves. Haunted America Suite (Summit Records, 2015) features five musical suites—including the spooky title set—that offer a well-balanced selection of spellbinding music. Compositions like “Why/Because” by James Grant, “Faraway Nearby” by Lon W. Chaffin, and “Suite for Horn, Tuba, and Piano” by Lester Pack give the album depth and diversity of moods, often leaving the spirit world behind to engage with Spanish folk music and even jazz.

Shearer plays tuba on all but one of the 17 pieces, while his wife, Celeste, plays horn; a rotating cast of pianists rounds out a trio. The three instruments provide the palette for conjuring ghosts as well as landscapes, and references to the Southwest are inescapable. As Shearer points out, the album enjoyed a long incubating process in New Mexico. Raines, the composer who wrote “Haunted America,” built his career at NMSU, and Chaffin is currently head of that school’s music department. Several of the other performers, as well as the producer, Steve Haddad, are current faculty or graduates.

“The Southwest itself is another world,” says Raines. “It’s alive with culture. Las Cruces is growing by leaps and bounds, but there’s always going to be the folklore because of the traditions, the culture. You couldn’t ask for a better surrounding to inspire such music.”

Chaffin’s “Faraway Nearby” is a sensitive portrayal of the desert landscape that doubles as an homage to Georgia O’Keeffe. The suite achieves some of the same effects in music that O’Keeffe achieved through paint—geometric simplicity, gradient colors, butterfly specks of movement across a sun-baked plain.

“I’ve really liked O’Keeffe’s work for a long time,” says Chaffin, “especially her abstract things. So I started looking through her paintings and I found motifs that I thought could be connected musically.”

In “Hills, Red and Gray,” the second movement of “Faraway Nearby,” dense layers of sound help the listener envision mesas rising in the middle distance, while a strong, stable pedal point represents the underlying rock. For Chaffin, music and visual art are complementary mediums. “Harmony and color are related pretty closely,” he says. “So are melody and line. Open fifths, in music, evoke the barren, open landscape—with a little bit of mystery. This music leaves you out in the middle of the desert.”

“Haunted America Suite” is a similarly evocative set of pieces, which opens, fittingly, with “La Llorona,” a popular Southwestern legend that tells of a woman who drowns her children to win a soldier’s love. Raines’ suite begins with her ghost calling plaintively for her children—as she is said to do even today.

From “La Llorona,” the music travels to Gettysburg on the fateful day of the battle, then to the plains of Oklahoma, and finally to the South, for “The Bell Witch.” Raines tells stories through his music, interweaving folk songs and hymns as themes in a style reminiscent of Aaron Copland. These songs are sometimes distorted for effect, as when “The Bell Witch” incorporates the hymn “Blessed Assurance” in a frightening minor variation. The virtuosic composition is matched by the musical ability on display throughout the album.

“These pieces are hard,” Shearer admits. Both he and Celeste point to the last group of pieces, Pack’s “Suite for Horn, Tuba, and Piano,” as especially difficult. This suite includes the ephemeral “Santa Fe Fantasy,” inspired by a trip to that city, and the swirling tune “Chacona Mulata,” based on a mysterious New World dance. “When you see the music in front of you and you think, ‘I have to play that,’ it’s hard not to be intimidated,” Celeste says.

For Jim Shearer, the musical challenges are definitely worth the effort—especially when the results are so striking. “I’m always interested when I go, ‘Wow, I didn’t know a tuba could do that,’ ” he says. People don’t always think of horn or tuba as melodic, expressive instruments in their own right, but the album aims to break popular preconceptions about the role of brass instruments in classical music.

Raines grew up playing tuba before switching to composing full-time. He credits Shearer, his teacher while at NMSU, with encouraging the switch. “Jim’s been my mentor for many years,” Raines says. “He’s inspired my vision through words.”

The pair’s decade-long creative partnership has helped launch Raines as a rising Hollywood composer. "Haunted America Suite" represents one of his earliest successful compositions, begun at NMSU. “Jim knew I was interested in eerie music,” Raines says. “He wanted me to do something from his childhood”—Shearer is from Mississippi—“and so I wrote ‘The Bell Witch.’”

Recording that work marks a milestone for both men. “We watched Justin grow up as a composer,” Shearer says. He adds, “These pieces were written specifically for us. It’s one thing to have the music published, but it comes alive with live musicians.”

Speaking of which, ghost enthusiasts might want to lend a close ear to “The Bell Witch” at the five-minute mark. There’s an audible door slam. “The performers don’t remember hearing it,” says Raines. “Nobody caught it until the final mix.” For Shearer, who has championed an approach to recording that captures the spirit of a live performance, the surprise vindicates his musical philosophy. Ghost or not, it’s proof that the unexpected can be haunting.

Haunted America Suite is available from Summit Records and other retail outlets. For information on Jim and Celeste Shearer’s tour schedule, which includes an Oct. 31 performance at UNM’s Keller Hall (505-277-4569; music.unm.edu), visit tubashow.us.