A-HA! Moments when our readers realized that New Mexico was the place for them.

by The Staff photos by User Submitted 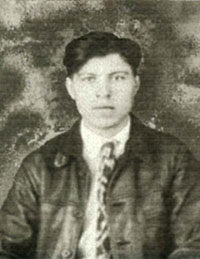 SHOT TO THE HEART
Although my mother’s family is from New Mexico, I was born and raised in California. I’ve visited New Mexico many times, as a child and as an adult with my own family.

In Abiquiú during the 1920s, my grandfather, Elizardo “Lee” Maestas, was the deputy sheriff for several years. During this time, the family lived in the future home of the artist Georgia O’Keeffe.

In recent years, we traveled to Abiquiú and took a tour of the O’Keeffe home. We talked to a local resident who told us that some of the oldtimers remembered my grandfather as the best deputy sheriff that Abiquiú ever had. We even got to see the bullet holes my grandpa shot into the ceiling of the cantina to stop a barroom brawl. They are still there to this day, in honor of my grandfather.

My connection to New Mexico became even stronger as I stared at that ceiling, and since then, I’ve connected with my grandmother’s Velarde relatives on Facebook.
Helen Maestas Najera Reyes
Morgan Hill, CA

COMING FULL CIRCLE
I was born and reared in New Mexico, and I grew up thinking it was everyone’s destiny to have bright blue skies every day, dramatic sunrises and sunsets to frame the day, horned toads to catch and tickle, mesas to roam in, the bosque to ride in, mountains in every vista, fall colors, the smell of roasting chile, and ignorance of racial prejudice. My wise parents insisted that my siblings and I go to another part of the country for college “to see how the other half lives,” so we could more deeply appreciate the Land of Enchantment.

My insatiable curiosity about places unknown led me all around the world. After living in North Carolina and Washington, D.C., I found myself living in London. One night, I was alone watching a television drama about the making of the atom bomb. The actors were shown in Los Alamos, other parts of the Jémez, Bandelier, and down toward San Ildefonso, Santa Fe, Albuquerque and, of course, White Sands. Somewhere along the line, I started to cry deep, wrenching sobs, and I could not stop. I missed my first love. I love the land. I love what my eyes see in New Mexico, and I am trying to make my way back for good. Is this true homesickness?
Connie (Katson) Bransilver
Naples, FL

HAPPY TRAILS
In the late ’80s, I came to Taos because Taos Ski Valley had the reputation as the best ski school with the most difficult terrain.

My “A-ha! I love New Mexico” moment occurred on a crystal-clear Thursday morning while skiing untracked powder down Lorelei with a ski school class led by instructor Jim Henderson. Jim’s knowledge and joy of skiing was contagious, and I subsequently fell in love with the Land of Enchantment. After more than 25 years exploring New Mexico, my wife and I intend to have our (now) good friend and extraordinary builder Jim Henderson build a home for us on land we acquired in Taos, so we can create more perfect moments such as listening to the bagpipe player on Sandía Peak; pretending to fly with our son through the dunes of White Sands; eating breakfast outdoors at the Bosque del Apache Festival of the Cranes; the Georgia O’Keeffe Museum; the margaritas at Doc Martin’s …
Charles Gill
San Diego, CA

THE POWER OF PRAYER
My wife and I were exploring the Gila Cliff Dwellings National Monument one day when we rounded a corner of a cave and came upon two men talking. One was a park ranger, and the other a distinguished-looking gentleman with hair pulled back into a ponytail, wearing a T-shirt, shorts, and sandals. The man with the ponytail, Richard, asked my wife and me if we would join them in a prayer. Of course we said yes. When Richard started to pray, the breeze blew into the cave, and after he prayed in the four directions and said “Amen,” the breeze stopped. We came to find out that the ranger was half Native American, and Richard was Apache, the great-great-grandson of Geronimo’s medicine man. It was a life-changing experience that we will never forget.
Richard Rogers
Bedford, TX

HEIGHTENED CONSCIOUSNESS
My husband and I vacationed in New Mexico for the first time this past summer, 2013, to celebrate his milestone birthday. We spent a week visiting Albuquerque and Santa Fe, and we planned an afternoon tour of Acoma Pueblo, atop the mesa. Given my intense, lifelong fear of heights, I was not looking forward to it. I tried to put my fears behind me for my husband’s sake. Much to my surprise, I felt my anxiety and fear of heights leave me while I was on top of the mesa with our group and tour guide. Our guide explained that Acoma was a place of peace and tranquillity, and I felt peaceful and serene while there. I was so relieved that I could enjoy the tour with my husband. I even walked right to the edge of the mesa and looked straight down without the usual butterflies in my stomach. Although my fears returned after leaving Acoma, I consider that to be the most A-ha! moment I could have ever had. I will always remember Acoma as my peaceful place and be grateful that it is the one and only spot where my fears disappeared.
Audrey Loera
New Hope, PA