A-Ha! moments when our readers realized that New Mexico was the place for them. 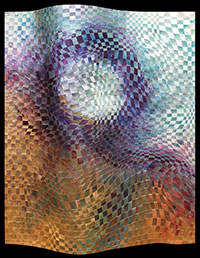 CARRIZOZO CALLING
For many years I was fortunate enough to live in New Mexico: in Silver City, Albuquerque, Carrizozo, and Ratón. It was here that I found good friends and met and married the love of my life. I studied art, developed my style, and began my art career. It was here that I explored the unique landscape, loved the sky, the light, the history of this enchanting place.

My husband died in 2006, and I moved back to Maryland to be near family. However, I pined for New Mexico. I found the Carrizozo Works [economic development organization] page on Facebook. When the snow was falling outside, I would grab a cup of coffee and see the latest photograph of Carrizozo—a lone tree in the desert; the clouds over the mountains; kids fishing in the lake at the community park; the unique architecture; piles of tumbleweed along a fence; a street fair—all the beautiful scenes of the place where I had left my heart. After six years, I returned to a town that is growing and moving forward while respecting its history and people.

Carrizozo is a small town in Lincoln County, the gateway to the Sacramento Mountains. In this town, the people are friendly and accepting, artists and creativity are valued, the sky meets the mountains, desert, and malpais in a changing spectacle of light and shadow that is inspiring.

I moved back to Carrizozo several months ago. My friends welcomed me back. We have fun making art, meeting at the café for breakfast, and watching the moon rise over the malpais with a glass of wine. I make trips to Santa Fe to deliver artwork to Waxlander Gallery, and to Madrid, where I sell my art at Tapestry Gallery.

It was when I watched the moon rise at the Valley of Fires that I had my A-ha! moment. I realized that I’ve come home and found my heart again. This is my enchanted place.

A NEW LEAF
Backtrack to the first decade of my life: fourth grade in Chicago. One day we learned that Santa Fe, in far-off New Mexico, is the oldest capital city in the United States. We also learned that Taos Pueblo is one of the world’s oldest continuously inhabited communities. “When I grow up, I’m going to see that old city and that old pueblo,” I said to myself, and then forgot all about it.

Fast-forward to the fifth decade of my life, still in the Chicago area: One of my daughters came home from seeing a movie. I expected not just a synopsis, but her usual detailed review.

“What was the movie about?” I asked. “Couldn’t tell you,” she responded. “Why? Did you fall asleep?” She laughed and said, “Oh, no, quite the opposite. I was so enthralled by the scenery that I didn’t pay attention to the story line. I wanted to concentrate on that beautiful scenery. The credits said the movie was made in New Mexico.”

Those words triggered the start of my journey to New Mexico. Oddly, neither of us remembers the name of the film. The local library had some things to read about the state, but not much in those pre-Internet days. One evening, while browsing the magazine offerings at a bookstore, I saw New Mexico Magazine and bought it. I climbed into bed with the mag, and at about three or four o’clock in the morning, I finally put it down after reading every single word of every article and every advertisement. I subscribed to the magazine the next day and hungrily devoured every page of every issue from then on.

Pretty soon, I started telling my family and friends that I planned on retiring in New Mexico. “You haven’t even been there,” was one comment. “Do you want to live with rattlesnakes and sand?”

Before long, I knew I wanted to settle in northern New Mexico, as I love four seasons, especially autumn and winter. Norteño culture also appealed to me. I decided I wanted to live in Abiquiú—sight unseen. Early one December, my son suggested we take a short “look-around” during Christmas. He secured airline tickets, and I made reservations for accommodations in Abiquiú, Taos, Santa Fe, and Albuquerque. As I was driving past the ruins of Santa Rosa de Lima, in Abiquiú, I told my son that I felt as if I were coming home. He replied that maybe I had been here before. Several years later, at the same spot, I heard myself telling my daughter the same thing, and she said the exact words my son had said on that first fateful visit.

My next trip was taken alone. In between the Abiquiú Studio Tour and a few reflective days at the Monastery of Christ in the Desert, I was driving down a dusty road back to the highway. I said, “Dear Lord, I am 99 and 44/100ths percent sure that I want to retire here. If you concur that I should spend my golden years here, please send me a sign.”

At that very moment, a gold cottonwood leaf gently, lazily drifted down and landed on my windshield. I retrieved it, and I still have it in this place I call home.

SANTA FAZED
While living in Connecticut in 2002, my daughter met and married a guy from Albuquer- que. They moved to Santa Fe, where they worked as a front desk manager and salesman, respectively, at La Posada hotel. We were very close, and I missed her terribly.

I was a supervisor at a 600 bed geriatric hospital. After 25 years, the stress was unbearable. Our visits to Santa Fe were getting harder and harder to return home from, especially after our granddaughter was born.

One day my wife and I went out to test-drive a new car and get a bite to eat. I started reading a magazine and burst out laughing. I had just realized how “Santa Fazed” I had become: I was reading New Mexico Magazine, wearing a Santa Fe shirt, eating a Santa Fe sandwich, and test driving a Hyundai Santa Fe!

Needless to say, it wasn’t long after I retired that we moved to Rio Rancho, where the “kids” were living—right next door. Plus I’ve worked in 20 TV shows and movies, including five episodes of my favorite, Breaking Bad.

God works in mysterious ways. I went back to working with seniors as an activities director in a job paying a third of my original pay, but where I’m ten times happier!

GIDDY-UP!
In 1996, a friend invited me to the Balloon Festival in Albuquerque. I had never been to New Mexico, and had a wonderful trip. Driving home through Gallup, we saw the big powwow going on, so we stopped. Next thing I knew, we were in the stands, the Indian Rodeo Queen galloped around the arena, and brought her horse to a sliding stop right in front of us. It was a glorious moment. The girls were all so beautiful and such expert horsewomen. I was enthralled.

Several nights later, I sat up in bed at about 2 a.m and said to myself, that’s what I want to do next—learn to ride a horse. I found a trainer, began taking lessons, and two years later bought my wonderful Rocky Mountain horse. Since then I’ve morphed into a real urban cowgirl. I’m amazed that all this has happened in my 50s and 60s, and I always look to New Mexico as the spring board to my fantastic horsey life—it’s more exciting than I ever dreamed. I hope whoever is reading this can sense the exciting turn my life made after that first visit to your state.