A-HA! Moments when our readers realized that New Mexico was the place for them. 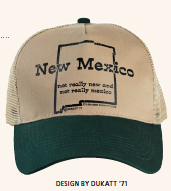 Have you had an A-ha! moment?
If we print your A-ha! moment, you’ll get a cool cap with this clever logo: “New Mexico, not really new and not really Mexico.”™ (You can also buy the hat at shop.nmmagazine.com.)

PINING FOR NM
While living in Wyoming and newly divorced, I was searching for a new teaching job. Looking through the listings, I saw one in New Mexico, but thought, “Oh no. I don’t want to go that far and live in the desert.” But I was desperate. The superintendent’s secretary, in a small town called Los Alamos, said Dr. Richard would be coming to Denver to interview several candidates. At least I would see what was offered. At the interview, Dr. Richard showed me a beautiful brochure of northern New Mexico. The piñon trees and big ponderosas resembled the little jack pine and big white pines of my native Michigan. And there was an outdoor skating rink at the bottom of a canyon! I was sold.

My daughter and I arrived at night, too dark to see much but the road ahead. In the morning, we decided to explore. I had to stop, awestruck at the scene before us: a majestic canyon with walls of all shades of colors, a deep green valley, and in the purple distance, the Sangre de Cristo Mountains topped with snow. I was breathless, and not just because of the high altitude. That was the A-ha! moment—in fact, I used the scene in my first novel The Adobe Castle (Ashley House, 1999).

For more than 40 years, I have lived in New Mexico and continue to relish more of these moments: the moon and Venus against a turquoise sunset, dazzling Orion on black nights, the deer in my back yard that come up to look in the window, and the view of the town from woodland trails, where I jog to prepare for the Senior Olympics.
Inez Ross
Los Alamos

SEE WHAT I MEAN?
My wife and I met in Houston, where I was attending the University of Houston. Cindy, who grew up in Ruidoso, kept telling me that she “could not see” in Houston. I told her that she should just step out into the street, and then she would be able to see quite a ways. A few months later, she transferred out of Texas to Las Cruces, and with her went my heart. After graduation, I got a job in the Las Cruces area. Moving to New Mexico I learned, to my surprise, what my wife meant about not seeing. Being able to look in any direction and see forever was an eye-opening experience.

I quickly became very accustomed to the vistas and beauty of the Land of Enchantment: watching the Organ Mountains change colors as the sun went down, then seeing the light race across the desert as the sun came up from behind the mountains each morning; driving from Las Cruces to Ruidoso in the spring and seeing the desert bloom; seeing the stars like I’d never seen them before.

Whenever we would go back to Texas to visit family, I’d quickly become claustrophobic, and wanted to get back to New Mexico as quickly as possible.
Dan Odum
Centennial, CO

COYOTE MEDICINE
I had never been to the Southwest before needing to attend back-to-back depositions in Tucson and Albuquerque in 1989. At the time, I was in-house counsel for a forklift manufacturer from the snowbelt in upstate New York. After my Arizona deposition, I went out to the Sonoran Desert and watched the sunset. I was at peace. “It’s nice here,” I thought. But then came New Mexico.

As I was standing at the window on the fifth or sixth floor of a small office building, waiting for the deposition to start, I looked out at the empty lot next door.

“What a mangy looking dog,” I said. The room (all locals) erupted in laughter.

“That’s a coyote,” howled one of the other attorneys in the room.

I was hooked as I watched the creature adeptly avoid humans and disappear behind some bushes. Talking to my husband on the phone from my hotel room early the next morning, I chattered on about how we had to come to New Mexico on vacation. At the same time, I drew back the drapes in the room, only to see three hot-air balloons rising in front of the mountains.

“It’s a sign,” I almost screamed into the phone. (I am nothing if not dramatic.)

I have always loved hot-air balloons. Maybe it was a sign, maybe not, but for the next 17 years (until I could take early retirement), every vacation day was hoarded to come back to what felt like home.

Now, the coyotes howling are a nightly occurrence, and while I worry about the feral cat and watch our beagles after dark, I always offer a silent thought of gratitude to the first “mangy dog” I ever saw.
Pat Shukis Fraser
Ruidoso

YOU MAY SAY I’M A DREAMER, BUT I’M NOT THE ONLY ONE
Years ago, while living in Michigan, I vividly dreamt that I was the sole passenger on a long handcart. I was rolling along with steady speed on railroad tracks. I wasn’t doing any cranking aboard this odd flatcar, just traveling, effortlessly and without a worry, across America. The railroad aspect of the dream made sense because, since 2002, I had been working as a train conductor and locomotive engineer.

In this dream, I rolled through flat green fields of Midwestern grain until the landscape turned from green corn to caliche rock, then to mesquite and ground-hugging cactus. The sky seemed to widen while this flatcar moved with smooth speed. A golden sun glowed over the horizon until a dark curtain of star-flecked night dropped. Planets and stars wheeled overhead while the steel wheels below me clicked in rhythm.

Another day in the dream dawned. Still rolling, I saw vivid colors in the sky chasing the sun. I reached a new area while crouched on the handcar. It was an enchanted place of blue plateaus and towering mountains. The car came to a smooth stop on its own, and I stood on my own two feet for the first time in what seemed ages. I noticed that the twilight contained colors I had no name for. There was a complete absence of worry in me. The dream ended with a feeling of rising yet serene exultation.

A few years later, the dream manifested in my waking life. After working in various railroad operations in Joliet, Illinois, and south of Detroit, I did find my way out West. I didn’t wind up rolling out on a handcar, but in an 18-year-old van. The dream completed itself in life, and a new cycle started. I was on my way to the bestpaying railroad job of my career, in Hobbs, New Mexico.

I’ve been living well in Hobbs for almost a year now. On my days off, I take drives out to the Sacramento Mountains, White Sands National Monument, Bottomless Lakes, and Mescalero Sands. My list of places to see grows constantly. New Mexico is still a place where there is room to fulfill your dreams, the sun at your back.