Tales of misinformation and misunderstanding about New Mexico 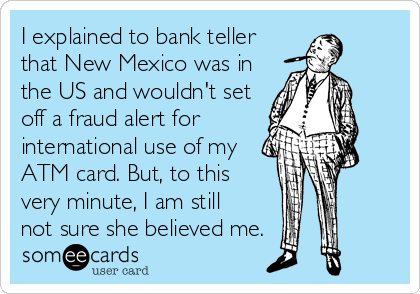 Donna Birchell, of Carlsbad, recently attended a real estate conference in Las Vegas, Nevada. When asked where she was from, she noticed that she received a number of different responses, “the main one being a full-on deer-in-headlights look,” she says. “I spent a great deal of time explaining how New Mexico was actually a state—for over 100 years now—and we were located between Texas and Arizona, and no, we were not from a new part of Mexico. Now, I could understand this from the residents of Canada who were attending, but these were also coming from the states of Florida, Massachusetts, and Michigan.”

One particularly enthusiastic woman from the state of Georgia—not to be confused with the Democratic Republic of Georgia—said, “Oh, it’s beautiful down there.” As Birchell let out a sigh of relief, the woman continued: “You’ve got great beaches!”

In September, Jerry Jones, of Richland Hills, Texas, called his bank to find out if they had ATM machines in New Mexico. The customer-service rep asked for his dates of travel, then informed Jones that he’d encounter conversion fees in Mexico. “I corrected her, and said that I was not going to Mexico, but New Mexico.” The rep then said that she needed to know Jones’s dates of travel because any time a customer wants to use his or her debit card outside of the country, the bank requires notification so that use of the card doesn’t set off a fraud alert. “I stopped her again, and reminded her that it was New Mexico, not Mexico. To this very minute, I am still not sure she believed me.”

Before moving to North Carolina, Carlos Moreno had always lived in the Southwest, and had taught at Eastern New Mexico University (ENMU) when he lived in Clovis. He was braced to experience a “Fifty” moment in North Carolina, but three years went by with nary a one. Then he moved to Tallahassee, Florida.

While there, Moreno taught an online ENMU class and received a check as payment. “It was printed in green, with a windmill on it and all the usual information from the local bank—all in English. Not a word of Spanish except the city name of Portales.”

The teller scrutinized the check with a little extra care—the way a bartender eyeballs a suspect $50 bill. She asked, without looking up, “Is this in regular U.S. dollars?”

Not wanting to embarrass her, Moreno said quietly, “New Mexico is a state in the, uh, United States.” Without acknowledging his response, she processed his check, although Moreno left concerned that the amount might take a little longer to show up in his available funds.

“One of the best-kept secrets in New Mexico are the vibrant, competitive Scrabble Clubs in both Albuquerque and Santa Fe,” writes Cydney Haynes, of Santa Fe. Mostly, Haynes plays with folks at the Flying Star Cafe, with locals and people who come north to Santa Fe on the Rail Runner. She also plays online, at Pogo.com and the Internet Scrabble Club (isc.ro). Both sites have chat boxes that are widely used. A common post when starting a game is, “Hello from Connecticut,” or wherever the player is from. Many times, Haynes has gotten curious responses when she types, “Hello from New Mexico.” For instance: “Oh, how lovely, I live in the United States.” Or, even better: “I didn’t know this game could be played out of the country!”

Dear “50” fans: Help sustain this popular feature by sharing your anecdotes—we know you have some choice ones that you haven’t gotten around to sending in. Just dash it off if you like, and we’ll take it from there. Submissions will be edited for style and space. Please include your name, hometown, and state. E-mail to fifty@nmmagazine.com, or mail to Fifty, New Mexico Magazine, 495 Old Santa Fe Trail, Santa Fe, NM 87501.