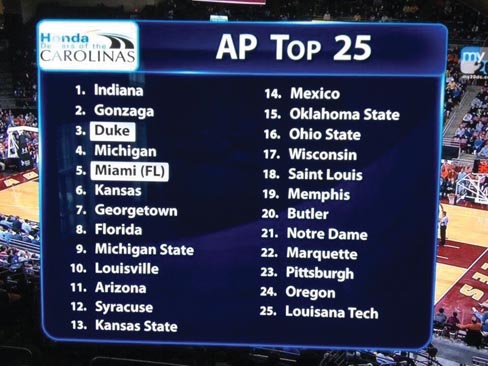 Before the University of New Mexico basketball team flopped early in the NCAA Tournament, all eyes were on the squad’s lofty national ranking. This screen grab featured a foreign team where the Lobos were supposed to be.

A recent article in the New York Times described the Scottsdale Convention and Visitors Bureau’s most recent advertising campaign as a “full-body wrap” of vinyl imagery that reimagined the subway cars as saloons, in hopes of enticing New Yorkers to visit. The Times captured a classic “50” comment in this quote from one Long Islander: “‘Arizona is next to Oklahoma,’ she said, wiping New Mexico from the map, ‘and I hate Oklahoma.’”

Heidi Chung, of Woodinville, Washington, was driving her eight-year-old daughter and a couple of her classmates to school. “The kids started talking about places they wanted to move to when they got older,” Chung remembers. “I mentioned that our family was thinking of moving to New Mexico some day.” One of the boys thought she said “Mexico” and seemed surprised by that location. Chung clarified by saying, “No, Carson. Not Mexico, but New Mexico.” After a pause, the little boy said, “Mrs. Chung, just because it’s new doesn’t mean it’s better!”

Donald Bishop, of Silver Cliff, Colorado, hoped to attend the 1996 Summer Olympics, in Atlanta. “I called the ticket office to see if I could get tickets, and the lady on the other end of the line asked where I was born,” he remembers. “I answered, ‘Logan, New Mexico.’” The woman paused, then informed Bishop that he’d have to contact the Mexican Embassy to attend the Games. “I told her she needed to get an atlas and discover that New Mexico is a state in the United States,” Bishop says. “I was unable to convince her.”

Managing Editor Candace Walsh encounter her own “50” moment during a layover at the Dallas–Fort Worth Airport. As she paid for a magazine, the newsstand clerk asked, “Where are you going?” When she replied, “New Mexico,” he asked if she was born in the U.S. She said yes. “Why would you move to Mexico if you were born here?” “New Mexico,” Walsh clarified. “Right,” he said. “Why would you leave this beautiful country?” She explained that New Mexico was Texas’s neighboring state to the west, but he continued to look at her as if she were a loca.

Tye Bell, of Farmington, moved to Hammond, Louisiana, where he lost his Social Security card. When he visited the local Social Security office to get a replacement, he told the federal employee that he was born in Farmington, and showed her his New Mexico driver’s license. “She then asked me if I had a green card, and told me that I spoke really good English.”

Dear “50” fans:
Help sustain this popular feature by sharing your anecdotes—we know you have some choice ones that you just haven’t gotten around to writing down and sending in. Just dash it off if you like, and we’ll take it from there. Submissions will be edited for style and space. Please include your name, hometown, and state. E-mail to fifty@nmmagazine.com,
or mail to Fifty, New Mexico Magazine, 495 Old Santa Fe Trail, Santa Fe, NM 87501.