New Mexico’s bold young distillery scene is starting to come of age, along with a homegrown cocktail culture that goes far beyond margaritas.

GRAPEVINES WERE FIRST PLANTED in New Mexico in 1629, and the craft beer scene, although its genesis is more recent (1988), is prolific and award-winning enough to cause us to confidently refer to the state as Craft Beer Capital of the Southwest (see our related March 2014 feature, “Brew Mexico,” at mynm.us/brewmexico). But have we got the spirits?

From my perspective as a national mixology consultant and author, the answer is yes, and the proof is on bar menus, in upscale liquor outlets, and in the exalted form of James Beard recognition. Local New Mexico cocktail culture is experiencing a boomlet, thanks in part to the 2011 Craft Distillers bill, which allows distillers to also serve as distributors and retailers. This opened the door for distilleries to become venues, like wine-tasting rooms and microbreweries.

Although most distilleries use local ingredients, even spirits companies that rely on key ingredients and processing from neighboring Mexico (Silver Coin Tequila, Del Maguey Mezcal) have given New Mexico’s mixology scene a boost by basing their operations here.

And it’s only getting easier for entrepreneurial purveyors of liquid mirth. It took two and a half years for White Rock–based Don Quixote Distillery to become the first licensed distillery in New Mexico history, back in 2004. “Laws were out of date, and there was confusion between federal, state, and county licenses,” says Don Quixote cofounder Olha Dolin, who surmises that she and her husband, Ron, were the first because other would-be distillers threw in the towel after being defeated by red tape.

Several new distilleries have made the scene since the Dolins staked their claim, and it’s likely that more will soon join them. Last month, another piece of legislation was passed that allows folks who are exploring the idea to rent excess working space from one of New Mexico’s licensed craft distillers without having to commit to the equipment and paperwork.

In response, dining and drinking establishments have stepped up, incorporating New Mexico’s fine firewaters into Only-in-NM cocktails. After living in Los Angeles for nearly two decades, I am back in Santa Fe, and thrilled to witness this burgeoning movement—so much so that I created the state’s first cocktail festival, New Mexico Cocktails & Culture (nmcocktailculture.com), which debuted in May.

Read on for more “proof”: nine distillers and recommendations of one of their standout bottles, five top cocktails from NM mixologists, and four of my own recipes, built to make the most of local liquors and signature flavors.

On a small, private farm nestled in the Río Grande bosque, Greg McAllister and David Pacheco have cooked up a corn-based gin, infused with juniper, piñon, sage, prickly pear, rose, and lavender. Also in the works: a line of whiskeys made from New Mexico blue corn and crafted into moonshine, bourbon, and even nut-flavored variations. Located between Albuquerque and Santa Fe, the distillery and tasting room are open to tours by appointment only, Friday–Sunday, 2–4 p.m. (505) 301-9992; algodonesdistillery.com

MUST TRY Ginebra Southwestern Dry Gin makes an NM-style gin and tonic, garnished with a squeeze of lime and a sage leaf.

Any self-respecting professional or home mixologist knows that a bar is not complete without an array of interesting bitters. Though it’s not a distillery, Bitter End Bitters, based in Santa Fe, brings a culinary approach to the cocktail with flavors such as Mexican Mole, Memphis Barbeque, Jamaican Jerk, and Curry.

MUST TRY Versatile Mexican Mole works beautifully with most spirits.

World-renowned artist and Ranchos de Taos resident Ron Cooper works with traditional growers in Mexico to make single-village mezcals from maguey plants, contributing to a renaissance of the drink. For his globally lauded efforts, he has been recognized as a 2015 James Beard Award finalist. Maguey plants are a kind of agave, and the process is similar to that of tequila production, although mezcals have a smokier flavor. delmaguey.com

MUST TRY Del Maguey Vida, with its delightful floral notes, offers a gentle intro to this category.

This outfit’s brand-new tasting room in the heart of Albuquerque allows visitors to view production through large glass windows. According to owner Matt Simonds, the lineup includes Horse Thief Rum and genever-style Bull-of-the-Woods Gin, made with a corn-based spirit, native juniper, and neomexicanus hops sourced from monks at the Christ in the Desert Monastery in Abiquiú. (505) 221-6281; distillery365.com

MUST TRY Horse Thief Rum, flavored with New Mexican pecans, is first on our list.

This mom-and-pop operation led the distillation boomlet in New Mexico. Blue corn is the base for its bourbon and vodka. Don Quixote’s wine, apple brandy, and cherry eau de vie are made from local, organic fruit. Don Quixote has two public tasting rooms, in Pojoaque and Los Alamos. (505) 695-0817; dqdistillery.com

MUST TRY The Pisqo is a unique play on South American brandy; it makes a delicious pisco sour.

Taos Lightning rye and bourbon whiskeys are aged outdoors in wooden barrels in Alcalde at Los Luceros Destilaría. The bourbon received a gold medal at the 2013 San Francisco World Spirits Competition, and the Brimstone Absinthe netted a silver, joining their Vodka Viracocha, which won a silver there in 2012. (505) 404-6101; kgbspirits.com

MUST TRY Made from potatoes and artesian spring water from Los Luceros, Vodka Viracocha is especially good in a dry martini. Unlike most vodkas (which contain one gram of sugar per liter), Viracocha has no added sugar.

You can learn how spirits are made in the Santa Fe distillery, or stop into its downtown tasting room, which is a popular little cocktail bar. Santa Fe Spirits’ Wheeler’s Western Dry Gin is flavored with local cholla blossoms, osha root, sage, and juniper. Piñon and ponderosa sap flavor their newest release, Atapiño liqueur. (505) 467-8892; santafespirits.com

MUST TRY The Apple Brandy, comparable to French calvados, is made from local apples, including ones from owner Colin Keegan’s orchard in Tesuque.

Lawrence Keeren, formerly a spec-house builder, launched Silver Coin Tequila in Santa Fe in 2009, naming it after the locally popular style of margarita. Tequila must be made in Mexico in order to qualify as the real stuff; Silver Coin’s agave is sourced in the highlands of Jalisco, and is known for lending herbaceous and floral qualities to the finished product.

You can visit Little Toad Creek Brewery & Distillery at its Inn and Tavern near Lake Roberts, and at its downtown Silver City tasting room. The husband-and-wife team makes spiced rum, whiskey, liqueurs, and craft beers.

MUST TRY The spiced rum is a delight, straight or mixed with ginger beer and lime.

Here are four cocktails I created with local ingredients, to show off the flavors of New Mexico.

The original Sidecar is made with cognac, a grape brandy from its namesake region in France. Taking a cue from that classic drink, the Dixon Sidecar tributes our famed local apple region, swapping out distilled grape wine for distilled apple wine.

Rub the rim of a martini glass with a slice of lemon. Dip into a plate of sugar. Set aside. In a cocktail shaker, mix apple brandy, orange liqueur, and lemon juice with ice. Shake well; gently strain into sugar-rimmed glass. 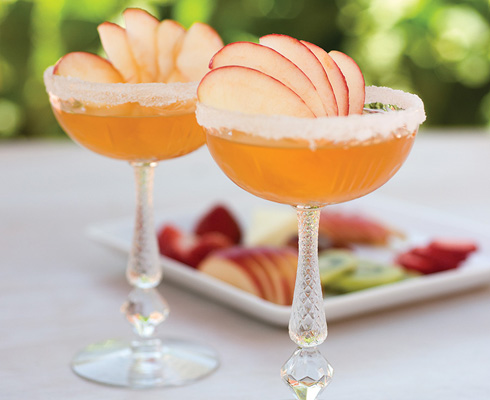 This drink is strong, yet feminine. The hibiscus-and-cabernet wine syrup is one of my signature creations, and it rounds out the floral notes with a bit of a punch. 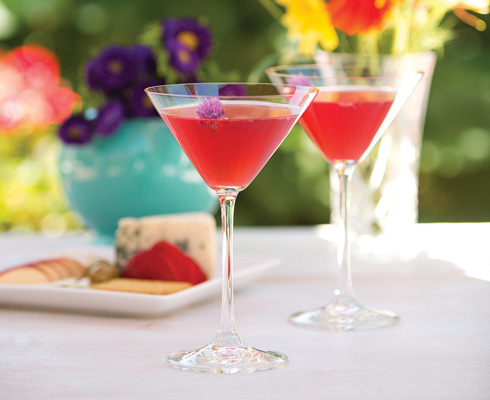 This cocktail would pair nicely with a hearty helping of enchiladas. 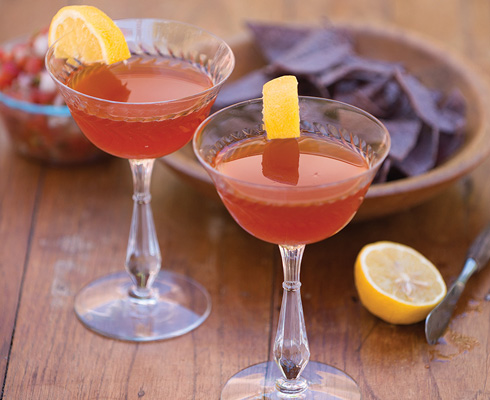 Any of our local gins would work well in this drink. I usually buy my culinary lavender at a farmers’ market, using the syrup in cocktails as well as in nonalcoholic lavender lemonade. 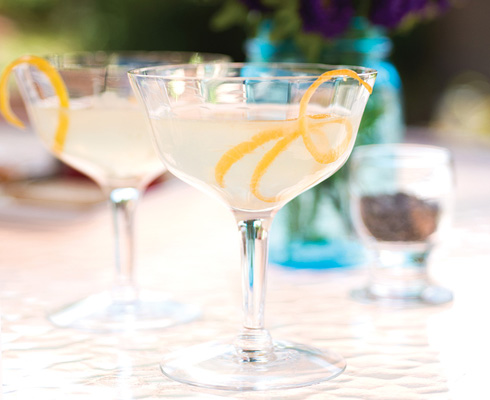 Lavender from the farmers’ market contributes local flavor to this gin sour.

Five of the top cocktails in New Mexico.