The Mistress of Ceremonies

Above: The success of the Dîner en Blanc party, held at Balloon Fiesta Park in 2014, helped Brown attract a following. 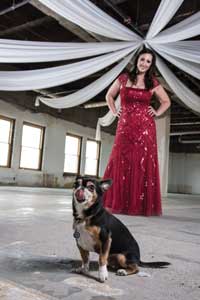 THE FIRST TIME I MET Micaela Brown was when she invited me to dinner—me and 200 other people, that is, for a banquet about which we were told little except the theme: “Seven Deadly Sins.” I had done a phone interview for a newspaper with Brown, the president of Heritage Events (the newly formed company that was hosting the lively affair), and she had alerted me to “expect the unexpected.”

I was not disappointed. The ballroom of the Eldorado Hotel in Santa Fe was draped in scarlet, giant gold candelabras graced the tables, and the waitstaff wore black Venetian carnival masks. The feast consisted of seven venturesome courses paired with seven Gruet wines, while seven sultry flamenco dances evoked everyone’s seven favorite no-nos.

Brown was hard to miss, a tall, dark-haired woman of 35 with a girlish face, wrapped in a glamorous lacy black-and-white dress. From across the room, she seemed intimidating, but when I tracked her down to say hello, she was disarmingly happy to see me. We’d only spoken on the phone, but she put down her drink and threw her arms around me in a warm hug that melted my journalistic distance into vapor. This was no corporate handshake, no schmoozy embrace. Having finished with all the planning and marketing and press releases, she was just delighted that I’d shown up to enjoy what she’d made.

The second time I met Brown was when we sat down at a Santa Fe coffee shop for a face-to-face interview. She looked all business this time, with a blazer and a laptop, caffeinated and ready to work. Brown has a crisp East Coast vibe, though she’s originally from Colorado. She speaks rapidly, firing off her CV with machinelike efficiency—the details of a rich former life working in government, in international trade and investment, running trade shows in Washington, D.C., and even interning at the U.S. embassy to the Vatican. She has a hundred irons in the fire even now, working with small companies on marketing strategies and doing consulting work with local startups through another of her companies, StartupABQ.

This might seem an unusual background for a woman who is swiftly becoming New Mexico’s newest mistress of ceremonies. Brown moved to the state only three years ago, but she immediately made it her mission to captivate us, her events seeming to already possess cachet despite being the “first annual” everything.

Never mind that she had never actually thrown an event before coming here. Brown’s background gave her some serious project management chops, a fierce work ethic, and buckets of gleaming professional polish, which she decided to put to use by putting on, of all things, a Chihuahua race.

The idea came to her after having her first bona fide New Mexico moment.

“My first week in New Mexico was magical,” says Brown. “I was living by the Cottonwood Mall [in Albuquerque], and I opened up my balcony one morning and heard Native American music in the background. There were hot-air balloons in the air because it was Balloon Fiesta, and I saw three muscly men walking Chihuahuas. And I thought: If they’re not ashamed to be seen walking Chihuahuas, then Chihuahuas are a thing.”

The Running of the Chihuahuas, in May 2014, was a surprise success, drawing 2,000 participants to watch 143 competitors race, including her own dog, Mr. Paws Barkley. That gave her the confidence to graduate to her next event, in October 2014: the state’s first Dîner en Blanc, an internationally franchised flash-mob-style dinner party at Balloon Fiesta Park. The roughly 800 guests all wore white, as if celebrating a mass wedding.

“People now call themselves the En Blanc crowd, and it’s only two years old,” says Brown. “That’s when I really got my name out there, I think.” 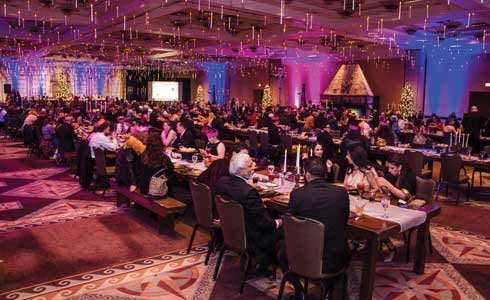 The Harry Potter–themed Christmas at Hogwarts banquet at the Hyatt Regency Albuquerque
was a benefit for UNM Children’s Hospital.

Then, in December 2014, Brown threw her landmark Christmas at Hogwarts, a banquet to benefit the UNM Children’s Hospital, for which she re-created the Christmas dinner scene in the Great Hall from Harry Potter, complete with talking holograms and a thousand electric candles hanging from the ceiling.

It was after this success that Jim Long, owner of Heritage Hotels, partnered with her to helm Heritage Events. Heritage owns a fleet of boutique hotels in New Mexico, including the Hotel St. Francis in Santa Fe, El Monte Sagrado in Taos, and the Nativo Lodge in Albuquerque. Their enchantingly immersive properties are ideal staging grounds for Brown as she expands her reach beyond her Albuquerque base. 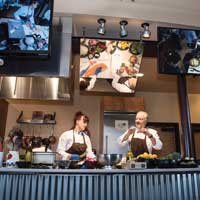 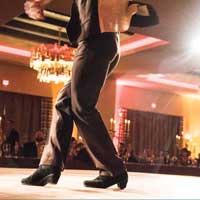 A flamenco dancer at the Seven Deadly Sins Dinner, part of the Classic weekend.

To begin with, in January, Brown branched out into Santa Fe with the first-ever Santa Fe Foodie Classic, a three-day gastronomic extravaganza that included a Food Network–style celebrity chef cooking contest, a grand tasting at the Santa Fe Convention Center, and the aforementioned Seven Deadly Sins banquet at the Eldorado, another Heritage hotel. The event had a cosmopolitan vibe and the theatricality that is Brown’s signature, but it still felt authentically New Mexican—heavy on red chile, Gruet sparkling wine, and flamenco.

All of this flamboyance takes elbow grease, most of it Brown’s. She does much of the tape-and-scissors work for her events herself, all in the service of her desire to bring us some out-of-the-ordinary joy. She is so good at marketing things in part because she is so enthusiastic, like a ringmaster who runs a circus out of pure love for circuses. Her ideas are audacious, but she pulls them off, hoping to show people what can be done, and what she thinks should be done, to celebrate the things she sees as quintessentially New Mexican.

“I got tired of seeing certain messages throughout the media,” says Brown. “I didn’t hear messages of pride and community and success stories, I wasn’t hearing ‘This is what makes us wonderful.’ I was hearing the opposite. And I realized that for me to change the message, I had to produce content. And I haven’t had a flop yet, knock on wood.”

Ask her about her future plans, and ideas spill out of her like champagne bubbles: a startup entrepreneur convention with a Shark Tank–style pitch contest, a heavyweight literature festival, an Italian-style street party where galleries host performance art. And of course, because Mr. Paws Barkley needs the action, she has a second Running of the Chihuahuas planned for August.

“I am always completely floored, even blown away, when people come to one of my events,” Brown admits. “Because you just never know. Watching people come through the doors—that, to me, is the most incredible moment, because your creation is live. Your product is launched. Your baby has been birthed, and people want it. They’re there to see it and experience it. It’s pretty phenomenal.”

—Tantri Wija is featured in “Storytellers”