Rewards of the Road Less Traveled 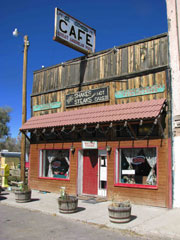 U.S. 60 appeals to unconventional souls. This string of tiny frontier towns, interrupted by only the Very Large Array, resonates with curious travelers blessed with a little extra time on their hands, an appreciation of wide-open landscapes, and a willingness to forgo the predictable convenience of cookie-cutter fast-food restaurants and truck stops in exchange for the charm of quirky saloons and mom-and-pop roadside cafés. There’s something endearingly peaceful about driving from bustling Socorro, over the verdant Magdalena Mountains, across the vast Plains of San Agustin, past dormant volcanic domes, toward the Arizona border—a much more poetic route than the Interstate for traveling to and from our neighbor to the west.

The wealth of well-preserved Victorian (mostly Queen Anne, gingerbread, and Gothic Revival) houses and other buildings around downtown hint at Socorro’s commercial success during the late 19th century. Indeed, following the discovery of silver in the mountains west of town in 1867, Socorro prospered; in the early 1890s, its population of 5,000 was the largest in the state. The mining industry subsequently declined, but it left Socorro with an enduring related legacy, the New Mexico Institute of Mining and Technology, better known as New Mexico Tech. Stop by the school’s Mineralogical Museum to view a spectacular collection of some 15,000 gems and minerals collected from throughout the Southwest and dubbed “Coronado’s Treasure Chest.” Near the town’s historic, tree-shaded Plaza, you can pick up brochures at the Socorro Heritage & Visitor Center, and visit the Old San Miguel Mission, parts of which date to the early 17th century.

In honor of Socorro having supported some 40 saloons during its boom years in the Territorial era, stop for lunch at Socorro Springs Restaurant & Brewery, an airy, modern space known for pizzas grilled in a pecan wood–fired oven and well-crafted lagers and ales, including the kicky but balanced Inner Glow Porter. El Camino Family Restaurant, a faithfully maintained 1950s-era joint, offers classic diner food, slices of pie, and more, 24/7.

As you leave Socorro, U.S. 60 climbs rapidly, twisting through canyons, crossing arroyos, and paralleling an erstwhile rail spur known as the “elevator” because it rose 2,000 feet in about 15 miles. In the town of Magdalena, the wood-frame Atchison, Topeka & Santa Fe Railway depot now houses the library. Drive south a few miles to reach Kelly, now a ghost town, but in the 1880s a wild-and-woolly boomtown with some 3,000 residents. Although founded as a silver-mining operation, Kelly prospered in the early 20th century as a source of zinc—some $20 million worth of the ore was extracted from these hills over a 25-year period. The mine is on private property, but visitors can meander among (though not inside) the several abandoned buildings and foundations, enjoying spectacular mountain views. Stop by Bear Mountain Coffee House for a one-day visitor pass. End your day at the atmospheric Golden Spur Saloon and M&M Grill, whose sprawling patio is a fine place to enjoy a strong margarita, a green-chile cheeseburger, barbecued chicken wings, and conversation with friendly locals.

Drive a few miles west of downtown to reach Rancho Magdalena B&B, a Territorial-style adobe inn whose three charming guest rooms have wood-burning fireplaces. Owners Lori and Lee Scholes also rent two- and three-bedroom vacation homes, including a cozy Victorian cottage in town and a secluded cabin in the foothills up toward Kelly Mine. Their downtown gift shop, the Market Place, carries antiques, Kachinas, Pendleton blankets, and Native jewelry.

Breakfast with a Side of Art

In the morning, walk through the faded-turquoise wooden door of Magdalena’s Bear Mountain Coffee House & Gallery, and jump-start your day with a cup of potent java and a delicious breakfast of blueberry sourdough waffles, or eggs Benedict over fluffy house-made biscuits, smothered in a spicy cheese sauce. In this century-old former bar lined with vintage photos of Kelly Mine, convivial proprietor Danielle Fitzpatrick also operates Magdalena’s visitor center and a gallery that represents several talented local artists. Check out Jose Padilla’s functional yet handsome quilt and rug hangers, which he crafts from red cedar, cholla, and willow; Yvonne Magener’s ornately decorated gold- and silver-leaf tiles and dyed emu, goose, and duck eggs; and Eddie Tsosie’s watercolor and acrylic paintings of life in the Diné Nation (he also painted the mural of Magdalena’s mountainous landscape on the gallery’s exterior).

As you venture west on U.S. 60, the seemingly endless Plains of San Agustin open up before you. There are few signs of human life out here, but do keep an eye out for the occasional herd of speedy pronghorn, North America’s fastest land mammal—these antelope-like creatures with distinctive white backsides and underbellies evolved to easily outpace the long-extinct American cheetah. Some 20 miles from Magdalena you’ll encounter one of the West’s most astonishing roadside attractions: a Y-shaped formation of 27 massive, bright-white antennas, each rising to the height of an eight-story building. You may recognize the National Radio Astronomy Observatory’s aptly named Very Large Array from Contact, the movie starring Jodie Foster. Scientists use these 82-foot-diameter radio telescopes to study such phenomena as black holes and quasars billions of light-years from Earth. Stop by the visitor center to view exhibits about the VLA, and take a free, self-guided walk that leads you directly below an antenna (guided tours are given the first Saturday of each month).

Continue west to Datil (rhymes with cattle), the first of three tiny towns along this span of U.S. 60. Datil once marked the beginning of the so-called Beefsteak Trail, a legendary, 125-mile cattle-drive route. You’ve now entered Catron County, New Mexico’s largest—about the size of Connecticut and Rhode Island combined, it has only some 3,700 residents. Datil is home to the only gas station between Magdalena and Quemado—it’s attached to Eagle Guest Ranch, where you’ll find a funky, wood-paneled steakhouse decked with Old West artwork, rifles, and wagon wheels, plus a small motel and RV park.

Just after you cross the Continental Divide you’ll reach Pie Town. Here in 1927, just a few months after the completion of the New Mexico stretch of U.S. 60—America’s first named coast-to-coast auto highway—a small gas station opened, its proprietor began serving delicious pies, and a legend was born. Arrive with an appetite, so that you can sample lunch offerings followed by the fresh-baked pies at both of the town’s esteemed eateries, Good Pie Cafe, known especially for the sweet-and-spicy New Mexico apple pie (with pine nuts and hot green chile), and Pie-O-Neer Pies, where each day’s selection of pies might include anything from cherry to chocolate chess, with red chile and piñon nuts.

The last hamlet on U.S. 60 as you head west—unless you count Red Hill (pop. 0), a ghost town 10 miles from the Arizona state line—is Quemado, which means “burned” in Spanish. Many visitors stop in this village because it’s the jumping-off point for sculptor Walter De Maria’s Lightning Field, a world-renowned art installation comprising 400 vertical, stainless-steel rods that attract lightning. (To view it, you must book an overnight stay in the on-site 1930s cabin. Book far in advance; see diaart.org/sites/main/lightningfield. The 2013 viewing season at the Lightning Field ends October 31.)

If all that pie-tasting hasn’t dampened your appetite, grab dinner at El Sarape, an endearing little café behind a rustic timber-frame façade that serves hearty, spicy, fresh New Mexican food (try the carne adovada enchiladas). It’s a fine choice for breakfast, too.

Like the other towns along U.S. 60, Quemado looks—one imagines—much the same as it did during the Truman administration. It’s a fitting end to a trip through rural western New Mexico, a part of the world that affords visitors a chance to step back, however briefly, in time.

The economical Largo Motel, completely rebuilt a few years ago, has 20 basic but comfortable rooms, plus a colorful, A-frame café serving stick-to-your-ribs American and Mexican fare.