Events around the state this month, including Deming’s Duck Race, the Gallup Inter-Tribal Indian Ceremonial, and cowboy gatherings in Cimarrón and Las Vegas.

(above) Michael Franti performs in conjunction with the Santa Fe Yoga Festival.

COWBOY COMEBACK
Las Vegas Heritage Week celebrates the architecture, culture, and history of the picturesque community at the foot of the Sangre de Cristos. This year, the festivities include the Las Vegas Cowboy Reunion, which is being revived to mark the event’s 100th anniversary (lvcowboyreunion.com). It’s a spirited Old West gathering that features a 100-horse parade (no motorized vehicles allowed) and a bus tour to Pecos to visit the John Gaw Meem–designed home and ranch of Tex Austin, the event’s cofounder. Other Heritage Week highlights: garden tours, Spanish folk dancing, chuckwagon dinners, and guided walks at Fort Union National Monument.  (505) 425-8803; lvcchp.org 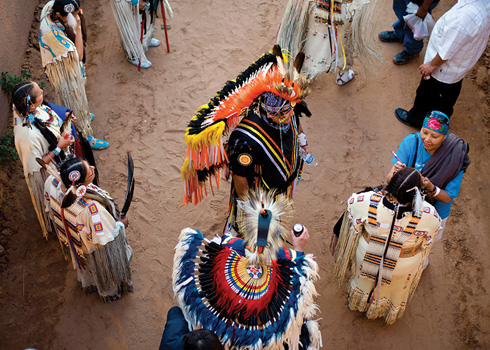 RED ROCK RODEO
“What’s really going to stand out is the rodeo—it’s bigger and longer than ever,” says Hilda Bowman, one of the organizers of the 94th annual Gallup Inter-Tribal Indian Ceremonial. This year’s powwow, extended by a day, includes a rodeo at Red Rock Park that’s part of the Indian National Finals Rodeo tour. Parades along downtown Gallup’s historic Route 66 will take place day and night during this five-day gathering of tribes from throughout the Western U.S. (505) 863-3896; gallupceremonial.com

BALANCING ACT
Kurt Young, who founded the Santa Fe Yoga Festival last year, says the emphasis this time is on wellness in general, for “people seeking balance.” Held on the Plaza and at the Scottish Rite Temple, the festival draws on the wisdom of its more than 40 teachers, who lead everything from ayurvedic cooking classes to dharma talks. On August 8, the positivist post-hip-hop group Michael Franti and Spearhead perform at Fort Marcy Park. (505) 913-0699; santafeyogafestival.org

CHAMA-RAMA
The warm days of August are perfect for riding the historic route of the Cumbres & Toltec Scenic Railroad, especially during the second weekend of the month, when the area comes alive for Chama Days. This summer festival features a concert by the Tierra Amarilla–based country-western band Perfect Stranger. Many activities are family-friendly, including a kids’ rodeo and a parade on Friday evening. (575) 756-2184; chamavillage.com

LEAD SINGERS
In 2011, Esperanza Spalding became the first jazz musician to snag the Grammy for best new artist. On August 6, she plays at the Lensic. It’s one of several noteworthy AMP Concerts in Santa Fe this month—check out folk-rocker Martin Sexton on August 16, and Russian-American rockabilly band the Red Elvises (August 19), both free at the Railyard Plaza. In Albuquerque, the Cuban band Los Van Van will get you moving at the National Hispanic Cultural Center on August 19, and folk chanteuse Dar Williams performs at the South Broadway Cultural Center on August 22. (505) 232-9898; ampconcerts.org

THE KID NEVER GETS OLD
With apologies to Breaking Bad’s Walter White, if New Mexico had an official state outlaw, it would surely be William H. Bonney, aka Billy the Kid, whose legacy—along with those of legendary figures like Pat Garrett, Frank McNab, and John Tunstall—is brought to life at the Lincoln Historic Site, near Ruidoso, where he took part in the infamous Lincoln County Wars of 1878–1881. In early August, the park, which consists of 17 structures that figured prominently in the conflict, hosts Old Lincoln Days, an entertaining mix of gunfights, dancing girls, and a Billy the Kid Pageant (billythekidpageant.org). (575) 653-4025; nmmonuments.org/lincoln

HIGH COUNTRY JAMBOREES
As noted in our July issue (mynm.us/july_roadtrip), summer is a great time to explore the high country of the Enchanted Circle road-trip route. In Red River, Hot Chili Days, Cool Mountain Nights (August 12–15) features four days of concerts by Texas-based country crooner Larry Joe Taylor and a talented posse of compadres, plus barbecue and green-chile cook-offs (575-754-2366; redriver.org). The following weekend, make your way to the haunted St. James Hotel and the Philmont Scout Ranch for some old-fashioned Wild West music and poetry readings during the annual Cimarrón Cowboy Gathering. (575) 376-2417; cimarroncowboygathering.com

WHY A DUCK?
One of the state’s quirkier—or shall we say quackier—events, Deming’s Great American Duck Race was created in 1980 as a bit of a lark. “A group of local leaders were hanging out at their favorite watering hole one night, and somebody mentioned having seen a duck race recently at a casino in Vegas,” recalls Dave Johnson, the event’s “publicity quacker.” “We thought, ‘Why not have one here?’”

Since then, the race has grown to become a beloved four-day festival, complete with wet-and dry-track duck races and a “duck royalty” pageant and parade. This year’s theme is “Jungle Duck,” and Johnson predicts you’ll see a few web-footed Tarzans at the associated events, which draw human participants decked out in related costumes.
(575) 544-0469; demingduckrace.com

ISLAND TIME
This year’s Elephant Days celebration moves from September to August with a luau theme, an inspired touch of faux-Polynesian tiki culture that’ll make the most of the lake-front setting.

FOR MORE EVENTS, GO TO mynm.us/nmm-calendar