Above photo by Rebecca McMullan

Bustling downtown Carlsbad’s riverfront park anchors the town’s five-week Christmas on the Pecos celebration, November 27–December 31. Each evening, boats set off with warmly bundled-up passengers on a watery-wonderland tour composed of more than 100 intricate shoreline light displays. These scenes, created by homeowners and businesses, range from the sacred (Nativity scenes) to the otherworldly (UFOs landing on a roof). They may have different themes, but, surrounded by darkness—velvety sky above, rippling water below—it all coalesces into a transporting and unique holiday ritual beloved by visitors and locals. Not surprisingly, tickets for peak dates sell out fast, so do reserve ahead of time (575-628-0952; christmasonthepecos.com). This season kicks off with the Calico Christmas Arts and Crafts Show, on November 28–29, and the first annual Plug In: Night of Lights Holiday Celebration, on that same Saturday at Halagueno Arts Park. Highlights: a tree illumination, light parade, and plenty of great food and music. The following weekend, at the Carlsbad Winter Wine Festival, $12 gets you samples from the dozen or so participating wineries, including St. Clair, Noisy Water, Dos Viejos, and Luna Rossa. Vendors selling specialty foods and arts and crafts are also on hand; there’s a VIP party on Friday night. (575) 522-1232; carlsbadwinterwine.com 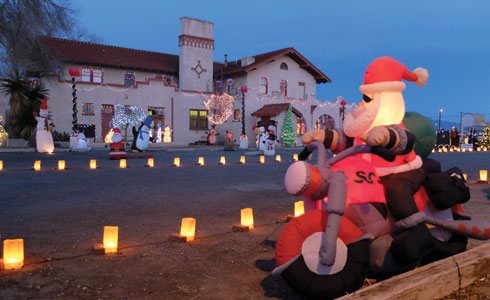 HAVE A HARVEY, JOLLY CHRISTMAS

“We actually get groupies who’ve been to every one of these,” says Ronnie Torres, referring to the riotously colorful, retro-fabulous Bugg Lights Christmas extravaganza at Belén’s Harvey House Museum (pictured). Torres is the director of the 105-year-old, handsomely restored museum. Featuring more than 50 Christmas trees decked with all sorts of quirky ornaments and hundreds of other handcrafted holiday displays, the Bugg Lights were created by, and for many years displayed at the home of, Albuquerque’s Bugg family, beginning in 1971. After moving around a bit in recent years, the over-the-top light show found a permanent home last year at this venerable former restaurant, designed with classic Spanish Colonial splendor. The celebration is free and open nightly—even on Christmas Eve and Christmas. “There’s holiday music playing, kids selling hot chocolate—we even set up a giant Nativity scene in the basement,” says Torres. Original members of the Bugg family have also been known to stop by on certain evenings. Not surprisingly, their many fans—known as “Buggsters”—go wild. (505) 861-0581;
belen-nm.gov/Community/HarveyHouseBelen.htm

LET THERE BE LIGHTS!

More than 500 illuminated animal sculpture displays are the attraction at Albuquerque’s River of Lights, which runs November 28 through January 4 at ABQ BioPark Botanic Garden (505-764-6280; cabq.gov). After Thanksgiving in New Mexico, luminarias— known as farolitos north of Albuquerque— begin to crop up on adobe rooftops and along neighborhood sidewalks. These paper bags anchored by sand, each containing a candle, provide a gentle glow. The Duke City presents an Old Town Holiday Stroll on December 4 (505-842-9918; visitalbuquerque.org) and the 50th annual ABQ RIDE Luminaria Tour December 24 (505-724-3100; cabq.gov), with shuttle buses transporting guests on hour-long tours around downtown and Old Town. In Taos, galleries and shops stay open late during the Lighting of Ledoux Street on December 5 and the similarly festive Bonfires on Bent Street on December 12 (575-758-3873; taos.org). The banks of the Animas River light up during Farmington Riverglo on December 4 (505-326-7602; farmingtonnm.org). Pine-scented Cloudcroft hosts the Lighted Christmas Parade and Tree Lighting, complete with an adorable Burro Avenue procession of pets in costume on December 5, as well as a bonfire-illuminated Santa Land at Zenith Park on November 28 and December 19, with a marshmallow roast and holiday games (575-682-2733; coolcloudcroft.com). On December 12, the Elephant Butte Luminaria Beachwalk features a floating parade of lights—view it from shore, which is lined with thousands of luminarias (575-744-4708; ebcocnm.com). The dramatic church remains at Jemez Historic Site are lined with farolitos during Light Among the Ruins, December 12. Included: dance performances by members of Jemez Pueblo, and horse-drawn carriage rides (575-829-3530; nmmonuments.org). The Luminaria Tour at Fort Selden Historic Site is held December 13 at this 1860s frontier outpost (575-526-8911; nmmonuments.org). On Christmas Eve, some 30,000 celebrants attend Santa Fe’s Canyon Road Farolito Walk (visitcanyonroad.com), while Old Mesilla Plaza near Las Cruces presents a joyous community Christmas caroling event (along with biscochitos and hot cocoa) from 5:30 to 7:30 p.m. (575) 524-3262; mesillanm.gov

With New Mexico’s incredible trove of Pueblo Revival and Spanish Colonial buildings, it’s easy to forget that the Land of Enchantment also has its share of ornate Victorians, and Las Vegas contains an especially impressive selection. Several of these grand homes are on display, decked with holiday trimmings and lights, during the Las Vegas Holiday Historic Home Tour on Friday, December 4. “We always include one church,” says Jeannie McKinley, of the Citizens Committee for Historic Preservation (CCHP), which organizes this self-guided tour. “And we usually try to include a traditional adobe home as well.” Spend the night at one of the grandest Victorian buildings in the state, the redbrick Plaza Hotel, before watching the Las Vegas Electric Light Parade the following evening. (505) 425-8803; lvcchp.org

“We don’t sell rides,” says Bill Lee, an organizer of Gallup’s 35th annual Red Rock Balloon Rally. “But we do encourage people to come early and volunteer as a crew member—our pilots will then do their best to get them up in a balloon.” Lee expects about 200 balloons, including some from Europe, at this free, three-day rally that opens with mass ascensions and includes a Christmas Parade on Saturday in historic downtown Gallup. (800) 242-4282; redrockballoonrally.com

Tortugas, near Las Cruces, holds one of the state’s most prominent observations of the Our Lady of Guadalupe Fiesta. Events commence with a vigil throughout the night of December 10, followed the next day by a pilgrimage on foot to the 4,928-foot-tall Tortugas Mountain, located a few miles east of Tortugas. Bring your appetite on December 12 to the traditional noon meal, which is a hearty feast of albóndigas (meatballs), red chile, beans, and fresh-baked bread, which follows Mass and includes performances by the pueblo’s four Native dance groups throughout the day. (575) 526-8171; tortugasnm.org 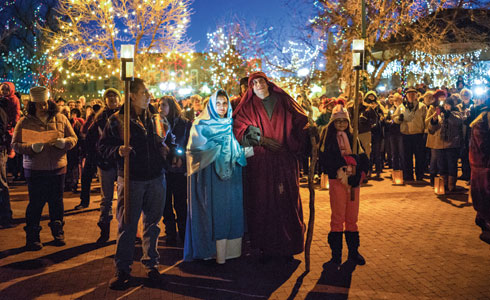 The kid-centric festivities at two of the Southwest’s most historic institutions can be enjoyed by holiday revelers of all ages. At the New Mexico History Museum on December 11, Christmas at the Palace (505-476-5100; nmhistorymuseum.org) includes piñata whacking, a visit from Mr. and Mrs. Claus, and the opportunity to operate one of the Palace Bindery’s 19th-century printing presses. Then, on Saturday and Sunday, the Young Native Artists Show & Sale showcases handmade arts and crafts created by children and grandchildren of the Native American artists who regularly exhibit their works under the Palace Portal. It’s a great opportunity to buy stocking stuffers; some of these young artists make excellent jewelry as well as Acoma-style painted Christmas tree ornaments. The fun concludes Sunday night with the annual Las Posadas procession, during which Mary and Joseph search among the Plaza storefronts seeking overnight lodging. Spoiler alert: the rooftop Diablos shouting discouraging words at them are ultimately foiled. On December 20, the New Mexico Museum of Art hosts a Holiday Open House. Watch plays featuring the historic marionettes of celebrated WPA woodblock artist Gustave Baumann, partake of puppet-making workshops, and have your photo taken with Santa. (505) 476-5072; nmartmuseum.org 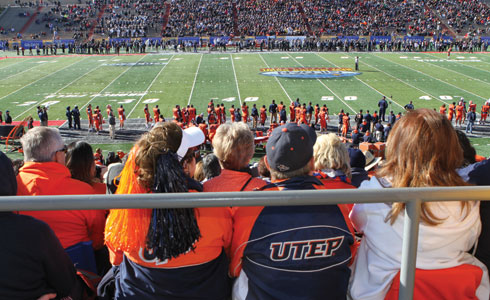 No matter how low the thermometer drops on December 19, the gridiron heats up at UNM’s University Stadium for one of the earliest contests of the college bowl season, the Gildan New Mexico Bowl. The game pits a team from Conference USA against one from the Mountain West. (505) 925-5999; gildannewmexicobowl.com

At Albuquerque’s Indian Pueblo Cultural Center, make holiday shopping into a reverent and fun experience at Pueblo Shop & Stroll: A Fireside Tradition, December 4 from 5 to 7 p.m. In between shopping at the holiday bazaar, where you can buy hand-painted ornaments, clay Nativity sets, jewelry, and more from their Native makers, you can take in a special nighttime performance of a fire dance from the White Mountain Apache Crown Dancers and wonder at the edible array of Pueblo Gingerbread House Contest entries. (505) 843-7270; indianpueblo.org

The state’s tribes observe Christmas Eve and Christmas with a rich variety of dances and rituals, and many of these events are open to the public, including the cultural dances (December 25–28) in the San Estevan del Rey Mission church at Acoma. A thousand luminarias line the Acoma valley road to the pueblo on Christmas Eve (505-552-7869; acomaskycity.org). On Christmas Eve at Tesuque Pueblo, a midnight Mass is followed by traditional rainbow dances (505-983-2667), and around Taos Pueblo plaza, small bonfires illuminate the evening vespers and procession of the Virgin Mary. (575) 758-1028; taospueblo.com

FOR MORE EVENTS, GO TO mynm.us/nmm-calendar