The nut of the official state tree—the piñon—packs tradition, culture, and incredible flavor into one notoriously tough shell.

Above: Pickers shake branches to release the nuts.

WHEN ALBUQUERQUE CANDYMAKER George Buffett savored his first taste of a New Mexico piñon nut, a winning business concept was born. Barely bigger than a grain of cooked rice, the nut imparted a delicately sweet and buttery flavor, one that Buffett knew would complement his chocolates, toffees, and brittles, while evoking a unique cultural essence. The seeds of New Mexico’s official state tree, Pinus edulis, had long sustained Native peoples and Hispanic settlers. Their families organized foraging parties to wild-gather the capricious nuts, which appeared only every now and then. When a good year landed, vendors sold them by the bagful.

To meld them with his candy, Buffett faced two problems: getting his hands on enough to meet what he knew would be a high demand, and cracking their small, hard shells without smashing the goods or driving his staff, well, nuts.

That was the 1960s. These days, Buffett’s Candies is run by the late founder’s children, who satisfy a national audience’s appetite for piñon nuts, piñon caramels, piñon truffles, and piñon logs from an otherwise nondescript shop on Lomas Boulevard. (They have a satellite store in Ruidoso, too.) If you’ve driven by the mother ship, you’ve likely noticed the giant candy cane out front. Stop. Go inside. This is the only commercial enterprise in New Mexico we’ve found that sells shelled, roasted, authentically New Mexican piñon nuts to the public. (Did we overlook your business? Let us know—we’re hungry.)

“My dad loved them, absolutely loved them,” Patty Buffett says. “He figured this was a way to differentiate our business from other candy businesses.” It required years of building relationships with Navajo families who gather the nuts from nearby forests. And it involved the genius of an engineer who built a super-secret shelling machine that isn’t on-site, can’t be described, and, no, Patty said, will not be photographed for this magazine.

Fine. The piñon story is bigger than the machine. Bigger than Buffett’s, too. It sprawls across New Mexico, seeps into the centuries, and forms some of the favorite memories and delicious dishes of those who call New Mexico home.

“PEOPLE HAVE DIFFERENT WAYS of picking them,” says Freddie Bitsoie, who grew up in Navajo country and recently took the reins of the Mitsitam Café at the National Museum of the American Indian in Washington, D.C. “They put a sheet down and climb the tree to shake the branches or hit them with a stick. As a kid, we always used to go piñon picking in the forest on weekends. My parents would take picnic foods. We’d spread out. It was such a tedious thing for kids to do, so we’d just run around and play.”

When he was executive chef at the Red Rock Navajo Casino in Gallup, Bitsoie worked piñons into a soup, “breaded” them onto salmon, and added them to a pumpkin-chocolate bread. Historically, though, Native peoples didn’t cook with them. “It was a snack food, a trail mix.”

Ounce-for-ounce as protein-rich as beef, piñons also deliver healthy fats. That one-two nutritional punch could stave off starvation when deer and fish were hard to find. One traditional preparation: Grind it with sugar into a paste called piñonate—the original Nutella! Legend has it that the trees bequeath a bounty only every seven years or so, depending on winter snows and spring rains. But the trees rarely agree on which year, so people like David Cuneo, owner of the New Mexico Piñon Company, scout the state to pinpoint the likeliest groves.

“It’s looking like a decent year,” he says, though a slight pause reveals his uncertainty. The cones don’t fully reveal their seeds until after the first frost and, from what he’s seen, “the trees that look promising aren’t very close to picking communities.”

On top of that, competition for the nuts has grown, and, with it, the price. Street vendors are charging a gulp-worthy $40 a pound, roasted and still in the shell. Given that the commonly accepted way to release the nutmeat—without help from Mr. Buffett’s magical machine—is in your mouth, the options for finding ones nicely shelled and ready to cook with are slim. “Just go to Buffett’s and buy it,” Cuneo says. (Good news: They ship—buffettscandies.com; $45 per pound, shelled.)

Or you can find a substitute. New Mexicans may turn up their noses at nuts from other species of pine trees native to China and Europe. Sometimes called pignoli or simply pine nuts, their flavor is gamier, a tad piney, Cuneo says, but that can also enhance savory dishes more than New Mexico’s fairer nut. And you can buy the foreign models shelled and in bulk. That’s how David Perry, executive bakery manager for the Range Cafés in Bernalillo and Albuquerque, manages to turn out so many piñon-chile apple pies and piñon chocolate tortes.

“I get a big, massive, shrink-wrapped, 50-pound block of it,” he says. Sllin Cruz, executive chef of Geronimo Restaurant in Santa Fe, will use non–New Mexican nuts, but has a supplier who sometimes comes through with small amounts of the local version, neatly shelled. “We don’t use that much then,” he says, “and it’s only for specials, not regular menu items.”

Travis Tegreeney, a Laguna Pueblo member and chef of Y’aak’a Café at Acoma Pueblo’s Sky City Cultural Center, says the best thing about working with piñons is tradition. “It’s part of our culture, and you can use it in many ways. When I was young, the hunters would use it in deer stew with pumpkin, hominy, and sweet corn. They’d share it with the community. It’s great.”

Opportunities like that come less often these days, in part because there are fewer piñon pines. In recent years, drought and bark beetles have left desiccated forests. That followed 19th-century logging operations and 20th-century grazing practices that cleared acre upon acre. Do you like the fragrance of burning piñon wood in winter? Remember where those logs came from. For New Mexicans who treasure the flavor, the wonder, and the myth of it all, the mandate is clear: Plant a tree. Plant five. You might have to wait 25 years for those babies to bear nuts, but future generations will most surely praise your name.

LAST FALL, you couldn’t drive through the mountains without seeing piñon pickers lining the road. The harvest was that bountiful. It might sound like fun, but the work is hot, hard, and sticky. Think “pine tar.” If you’d rather buy them already harvested, check out Cuneo’s website (pinonnuts.com; $30 per pound, in the shell) or visit a street vendor. Cuneo advises that, if you choose the latter, be smart and taste a nut from the bag—not the sample cup. An out-of-state piñon nut, he warns, might look like a New Mexico one, but could carry a shell thick enough to crack a molar. Check how evenly the roasting was accomplished. If every 10th nut is burnt, you’re losing a lot of product for your $40 a pound. More good news: The 1987 New Mexico Pine Nut Act outlaws labeling and selling outsider nuts as one of ours.

As for getting past those stubborn shells to the pearly treasure inside, Cuneo says it’s best if you learn as a child from your grandpa while on a camping trip—the way he did. Otherwise, “Put it on the back of your molars and roll it till it cracks on the seam. If you’re a novice, take it out and pick the meat out. If you’re an expert? No hands.”

It may sound dauntingly slow, but consider the tale of one child’s prodigious shelling ability, as told by longtime New Mexico journalist John Robertson. “A radiator reportedly once fell away from the wall in Mrs. Evans’s fifth-grade class at Acequia Madre Elementary School in Santa Fe when a massive accumulation of piñon shells lodged behind it cascaded to the floor.” The story may carry more legend than fact, he acknowledges. Nevertheless, “the nearest student was the school hero for the rest of the year.”

A PIÑON PALATE
New Mexico chefs have devised various ways to bring the piñon nut’s mellow flavor into main dishes, sides, and desserts. We asked a few for recipes that could elevate a Thanksgiving feast. If New Mexico piñons aren’t available, you can substitute other varieties, which are generally available at grocery stores already shelled. 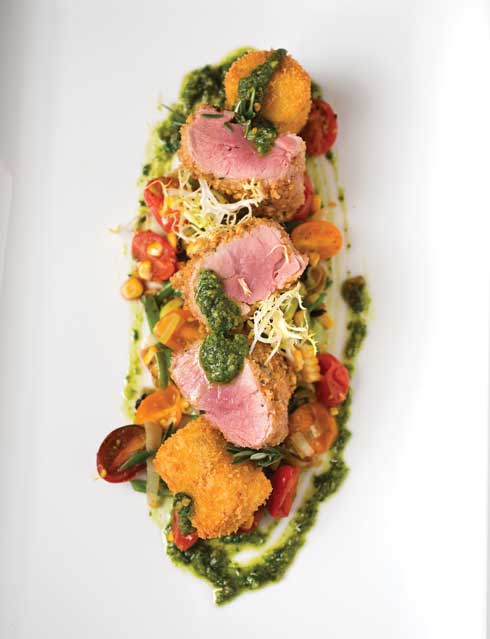 Pine Nut Soup
Recipe courtesy of Freddie Bitsoie of Mitsitam Café at the National Museum of the American Indian in Washington, D.C.
Serves 4